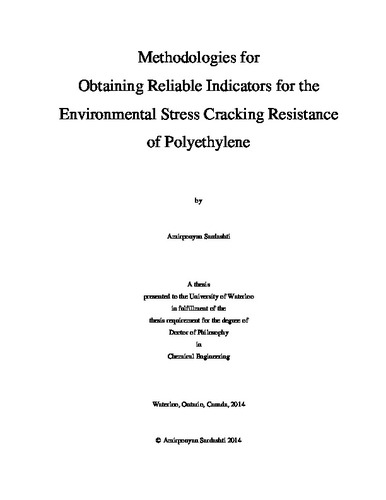 Environmental stress cracking (ESC) is one of the main, and probably the most common, failure mechanisms involved in polymer fractures. This type of failure is critically important as it occurs suddenly, without any visible pre-fracture deformation. Such failure can be catastrophic and costly in cases where structural integrity is required. In polyethylene (PE), ESC occurs through a slow crack growth mechanism. Cracks initiate from stress-concentrated imperfections, propagate through the bulk of PE, and ultimately result in a brittle fracture. In order to predict the environmental stress cracking resistance (ESCR) of PE, it is necessary to fully understand the molecular structure of the resin. In this thesis, attempts were made to find relationships between molecular structure characteristics and material responses, mainly inter-lamellar entanglements and strain hardening behaviour of PE resins, through mechanical and rheological experiments. Inter-lamellar entanglements are believed to be the main factor controlling slow crack growth of PE. Extent of entanglements and entanglement efficiency were investigated by monitoring the strain hardening behaviour of PE resins in the solid state through a uniaxial tensile test, and in the melt state, through extensional rheometry. ESCR is usually assessed by unreliable and time consuming testing methods such as the notch constant load test (NCLT) on notched PE specimens in the presence of an aggressive fluid and elevated temperatures. In this thesis, a practical, yet reliable, tensile test was developed for the evaluation and prediction of ESCR. The developed test offers a more reliable and consistent ESCR picture without the drawbacks of the subjective notching process and presence of aggressive fluids. Through this test, a factor called “corrected hardening stiffness (cHS)” was developed, which can easily be used for a relative ranking of ESCR of different PE resins. Studies were next extended to the melt state via shear and extensional rheometry. Through studies in the shear mode, a molecular weight-normalized average characteristic relaxation time (λN) was found to be efficient in predicting the extent of chain entanglements in resins. This provided a potential melt indicator for a relative measure of ESCR, for linear low density polyethylene (LLDPE), with different short chain branching levels. Extensional studies were conducted to evaluate the strain hardening behaviour in the melt state. An inverse correlation was obtained between ESCR and the melt strain hardening coefficient (MSHC), found from Sentmanat Extensional Rheometry (SER). This indicated an inverse relationship between ESCR and chain extensibility in the melt. In addition, a new factor called “melt hardening stiffness (mHS)” was developed from the slope of a stress-strain line, obtained from SER. This factor, analogous to cHS, can be used for a practical and reliable ranking of ESCR of PEs. ESCR is usually associated with classical crystalline phase property indicators, such as crystallinity and lamella thickness. In this thesis, the effect of processing and post processing temperature on the extent of inter-lamellar entanglements were investigated, evaluated, and correlated to ESCR. Also, analysis of the lamella surface area (LSA) was pursued since LSA reflects changes in phase interconnectivity more precisely. The focus of this part of the study was on the effect of temperature on LSA to identify the optimum processing and post-processing conditions which yield a higher LSA. It was reasonable to presume that PE with larger lamella lateral surface areas will have more inter-lamellar entanglements, hence higher ESCR. Finally, a well-controlled ultraviolet (UV) photoinitiated reactive extrusion (REX) process was developed for selective formation of long chain branches in the PE structure. This was conducted to impose restrictions against stretching of the polymer chain, which consequently enhanced ESCR.