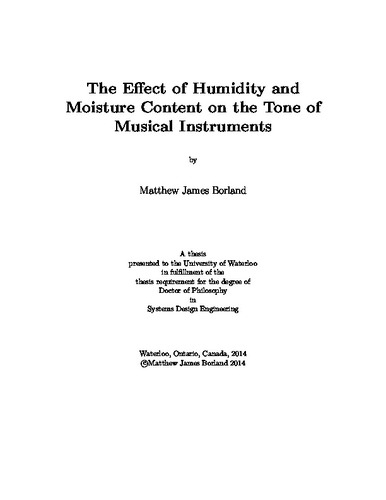 The purpose of this research work is to investigate the relationship between humidity and tone in musical instruments. A basic hypothesis that motivates this work is that normal seasonal variations in relative humidity are thought to alter the tone of instruments constructed from wood. These changes in tone are believed to be due to changes in the dimensions and material properties of an instrument that are a result of wooden components absorbing and adsorbing water in equilibrium with their ambient environmental conditions. To investigate this hypothesis an experiment was conducted with a guitar acclimatized at different relative humidity levels. Sample sounds recorded at each humidity level were then evaluated by the test subjects using a three alternative forced choice listening test paradigm. Subjects were readily able to distinguish sounds recorded at different humidity levels, supporting the claim that changes in ambient humidity can create perceptible differences in instrument tone. A finite difference model was then developed to produce simulated sounds as a function of moisture content (MC being the weight percentage of a piece of wood that is water). The model was validated and further listening tests were conducted to determine the perceptual limit of MC differences. The just-noticeable difference value for MC change was established to be 0.7% MC difference. To be considered imperceptibly stable with respect to tone, materials used to replace traditional soundboard woods would need to have less variability than the equivalent material property changes due to this 0.7% MC difference. Testing of an acetylated plate in terms of its vibration and material properties followed. An increase in both stiffness and density was noted, yet even after modification the vibration properties of the plate were observed to remain within an acceptable range of material properties typical of soundboard grade woods. Instrument builders would likely welcome this new material, as long as its properties can be shown to not vary significantly from traditional choices. A second component of this thesis concerns the application of wavelets in musical analysis. Psychoacoustical signal parameters (PSPs) are a tool used to quantify aspects of sounds, such as brightness or percussiveness. These PSPs are often calculated using the Fast Fourier Transform (FFT), an algorithm that has certain limitations. To address the deficiencies of the FFT a wavelet transform was em- ployed and conventional PSPs were reformulated in the wavelet domain to improve their accuracy. Tonal differences due to changes in MC were shown to be well suited to analysis by wavelet PSPs where improved sensitivity was observed in comparison to the conventional methods. Finally, an acoustical study of the development of the piano from the clavichord to the modern grand piano was conducted. An improved bass response and the presence of more energy in the upper partials, particularly in these bass notes, were concluded to be due to an increase in soundboard area, the introduction of longer string scale lengths, and the use of wound strings for bass notes.

Matthew James Borland (2014). The Effect of Humidity and Moisture Content on the Tone of Musical Instruments. UWSpace. http://hdl.handle.net/10012/8253