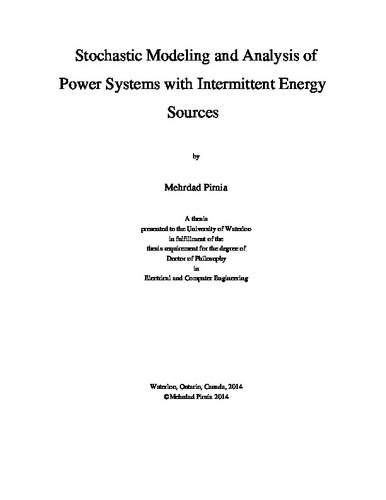 Electric power systems continue to increase in complexity because of the deployment of market mechanisms, the integration of renewable generation and distributed energy resources (DER) (e.g., wind and solar), the penetration of electric vehicles and other price sensitive loads. These revolutionary changes and the consequent increase in uncertainty and dynamicity call for significant modifications to power system operation models including unit commitment (UC), economic load dispatch (ELD) and optimal power flow (OPF). Planning and operation of these “smart” electric grids are expected to be impacted significantly, because of the intermittent nature of various supply and demand resources that have penetrated into the system with the recent advances. The main focus of this thesis is on the application of the Affine Arithmetic (AA) method to power system operational problems. The AA method is a very efficient and accurate tool to incorporate uncertainties, as it takes into account all the information amongst dependent variables, by considering their correlations, and hence provides less conservative bounds compared to the Interval Arithmetic (IA) method. Moreover, the AA method does not require assumptions to approximate the probability distribution function (pdf) of random variables. In order to take advantage of the AA method in power flow analysis problems, first a novel formulation of the power flow problem within an optimization framework that includes complementarity constraints is proposed. The power flow problem is formulated as a mixed complementarity problem (MCP), which can take advantage of robust and efficient state-of-the-art nonlinear programming (NLP) and complementarity problems solvers. Based on the proposed MCP formulation, it is formally demonstrated that the Newton-Raphson (NR) solution of the power flow problem is essentially a step of the traditional General Reduced Gradient (GRG) algorithm. The solution of the proposed MCP model is compared with the commonly used NR method using a variety of small-, medium-, and large-sized systems in order to examine the flexibility and robustness of this approach. The MCP-based approach is then used in a power flow problem under uncertainties, in order to obtain the operational ranges for the variables based on the AA method considering active and reactive power demand uncertainties. The proposed approach does not rely on the pdf of the uncertain variables and is therefore shown to be more efficient than the traditional solution methodologies, such as Monte Carlo Simulation (MCS). Also, because of the characteristics of the MCP-based method, the resulting bounds take into consideration the limits of real and reactive power generation. The thesis furthermore proposes a novel AA-based method to solve the OPF problem with uncertain generation sources and hence determine the operating margins of the thermal generators in systems under these conditions. In the AA-based OPF problem, all the state and control variables are treated in affine form, comprising a center value and the corresponding noise magnitudes, to represent forecast, model error, and other sources of uncertainty without the need to assume a pdf. The AA-based approach is benchmarked against the MCS-based intervals, and is shown to obtain bounds close to the ones obtained using the MCS method, although they are slightly more conservative. Furthermore, the proposed algorithm to solve the AA-based OPF problem is shown to be efficient as it does not need the pdf approximations of the random variables and does not rely on iterations to converge to a solution. The applicability of the suggested approach is tested on a large real European power system.