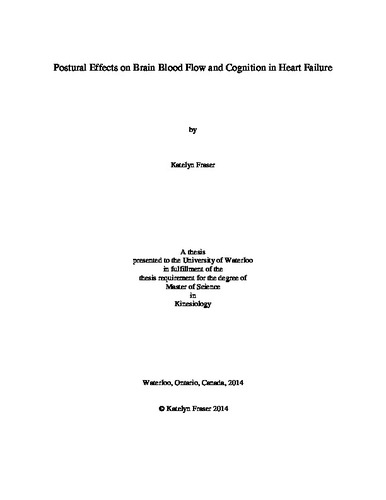 With the aging population on the rise, the prevalence of heart failure is expected to increase in the coming years. Heart failure is independently correlated with cognitive decline and has a negative impact on quality of life, morbidity and mortality. Reduced cardiac output (Q) and cerebral blood flow (CBF) are proposed mechanistic links between heart failure and cognitive decline; however, reports are limited to the supine position and the response to an everyday upright posture is unknown. The purpose of this thesis was to primarily investigate the CBF response to a common upright seated position encountered in daily life in heart failure patients compared to healthy age- and sex-matched controls. Furthermore, we sought to determine whether cognitive performance or cognitive-activated hemodynamics were posture-dependent in the heart failure group. The secondary objective of this thesis was to be inclusive to patients that represent those encountered in clinical practice—specifically to include patients with higher left ventricular ejection fractions (LVEF) and atrial fibrillation with co-existing heart failure. Our findings confirmed greater cognitive impairments and a low supine CBF and Q in heart failure compared to controls and importantly, for the first time, a greater reduction in CBF with an upright seated position compared to healthy age- and sex- matched controls. When a cognitive task was performed supine and seated, performance outcomes were independent of posture in heart failure patients. However, mean flow velocity through the middle cerebral artery (MFV_MCA) increased less in response to the cognitive task seated. With regard to our secondary objectives, the results suggest that those with higher LVEF are equally at risk for cognitive decline and cerebral hypoperfusion due to a low Q. Furthermore, high variability in Q and MFV_MCA were detected in association with the beat-to-beat variation inherent to atrial fibrillation and suggest that this may be an underappreciated pathway to cognitive impairments in this sub-group. Together, these results suggest that upright cerebral hypoperfusion throughout the day may contribute to cognitive decline in heart failure and create a basis for further work to be done with larger sample sizes. Moreover, cerebral hypoperfusion with higher LVEF and the blood flow variation in atrial fibrillation represent important pathways contributing to cognitive decline in these under investigated sub-groups.