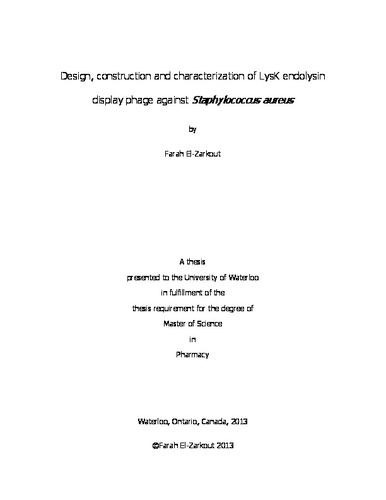 The growing threat of drug- resistant Staphylococcus aureus (S. aureus) infections mandates the need to develop novel, effective and alternative antibacterial therapeutics. Despite infection prevention and control measures, methicillin resistant S. aureus (MRSA)-associated deaths reached 11,285 in 2011 in the USA (CDC, 2013). To counteract the threat of drug resistant S. aureus, we sought to construct and characterize a novel therapeutic based on the display of lytic antibacterial enzymes, termed endolysins. These endolysins were displayed on the surface of a specific bacterial virus, bacteriophage (phage), to generate lytic antibacterial nanoparticles. Endolysins are encoded individually by a variety of double-stranded DNA phage and act to direct host lysis and escape. These lytic enzymes confer a high degree of host specificity that could potentially substitute for, or be combined with, antibiotics in the treatment of gram-positive drug resistant bacterial infections such as MRSA. In this study, modular domains of the phage-encoded endolysin K enzyme, specific to S. aureus, were displayed on the capsid surface of phage lambda () via fusion with the λ major head (capsid) protein, gpD. The constructs of displayed endolysins were prepared in various combinations to maximize the functional display of gpD::X fusions on the phage. Phage lysates were generated, collected and purified and lysis was investigated by adding to fresh lawns of MRSA, vancomycin resistant S. aureus (VRSA) and bovine S. aureus. Phage preparations did not readily confer cell lysis, likely due to poor incorporation of the fusions onto the functional phage capsid. We purified the fusion proteins (gpD::X) and tested them for their lytic activity. We noted that the activity of the gpD::LysK protein was not impaired by the fusion and demonstrated lysis on live and dead (autoclaved) bovine S. aureus. In contrast to gpD::LysK, the gpD::CHAP protein fusion, expressing only the CHAP catalytic domain of endolysin K showed variable results in the lysis assays that we performed. In the zymogram assay, gpD::CHAP did not elicit any observable lysis on live bovine S. aureus cells, but did effectively lyse dead cells of the same S. aureus species; however, it was highly lytic in the inhibition assay on bovine S. aureus. The CHAP::gpD protein fusion, which is the CHAP domain fused to the N terminus of gpD only showed its ability to inhibit bovine S. aureus growth on the inhibition assay. The fusion of endolysin K or its CHAP domain to gpD protein does not seem to interfere with lytic activity, but may result in recalcitrant gpD fusions that compromise the ability to efficiently decorate the phage capsid. Suggestions for improved fusion capsid integration are discussed.