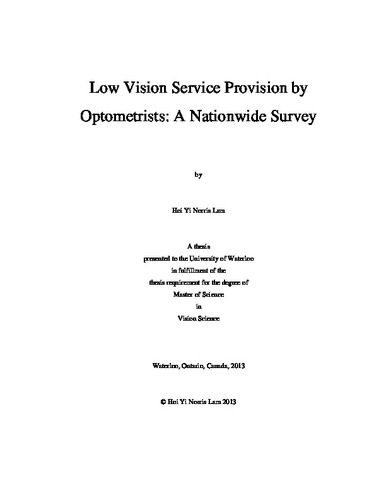 Purpose: The prevalence of age-related visual impairment is projected to increase as the Canadian population ages. As a result, the demand for low vision service is also projected to increase. However, there is a lack of healthcare planning regarding vision rehabilitation in Canada. The current study is the first study that describes optometric low vision services across Canada. The primary purposes of this study were to determine the provision of low vision services by optometrists in Canada, the barriers to providing low vision services and the pattern and perception of referrals to specialised low vision services. The secondary purposes of this study were to examine regional differences in low vision practice and referral patterns, and to identify predictive factors associated with the extent of optometric low vision care. Methods: Practising optometrists across Canada (n=1839 or 40.5% of the Canadian optometric population) were randomly sampled so as to obtain approximately equal responses from the Western Provinces, Ontario, Quebec and the Eastern provinces. Between October 2010 to January 2011, optometrists were invited to participate in a 30-item questionnaire that included questions on personal profile, primary practice profile, types of patients seen, levels of low vision services offered, patterns of referral and barriers to provision of low vision care. Descriptive statistics were used to describe the current landscape of optometric low vision care. Chi-square analyses were used to identify any regional differences in pattern of low vision provision and/or referrals. Multivariate logistic regression was used to determine the predictive factors associated with the extent of optometric low vision care. Written comments on low vision education and provision of low vision services were first coded to represent relevant categories of information emerging from the written data. Then the patterns of coding were grouped into common themes. Results: A total of 459 optometrists responded (24.8%). Optometrists estimated that 1% (range 0-100%) of their patients were patients with low vision, yet also estimated that 10% of their patients had a best corrected visual acuity of ≤6/12. Almost three-quarters of respondents would manage a hypothetical patient with minimal visual disabilities and simple visual goals with high-powered additions and lighting; however, the proportion of those who would manage with the same patient with magnifiers and filter lenses dropped to 43%. The most frequently cited barriers to providing more extensive low vision services were found to be related to financial non-viability, lack of affordability by the patient and the time-consuming nature of conducting a low vision assessment. The percentage of respondents who cited no interest in low vision was 33.5%. Many respondents would like to see more continuing education on low vision, preferably through a hands-on approach. The most frequent site of referral was CNIB (81.9%), although most of the respondents (57.1%) rarely (0-5% of the time) or almost never (0-25% of the time) received a written report from the low vision service providers. Chi-square analyses revealed that optometrists in Quebec tended to refer eligible patients to government-sponsored vision rehabilitation centres, while optometrists in Eastern provinces tended to manage patients on their own. The predictive factors associated with the extent of optometric low vision care were advanced years of practice (16+ years), having local low vision optometrists/ophthalmologists within one-day’s travel, working in a practice within a population of less than 50,000 and working in a non-solo practice. Conclusions: This study documents that optometrists may be undertaking more low vision (LV) in patients with relatively good vision than they tend to label as LV. Vision rehabilitation is of interest to a large portion of optometrists across Canada. To translate the interest into practice, barriers identified by the current study must be addressed.