Ecology of Ammonia-oxidizing Archaea and Bacteria in Freshwater Biofilters 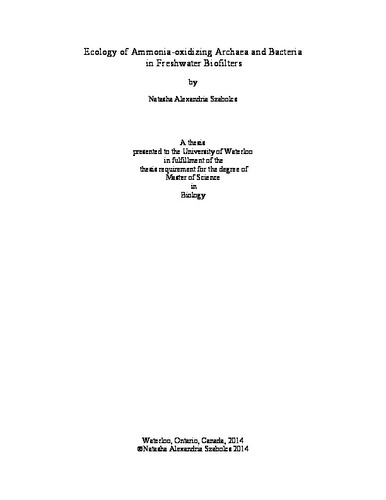 Aquarium biofilters are designed to promote the growth and activity of nitrifying microorganisms, which are primarily responsible for the removal of toxic nitrogen-cycle intermediates. Ammonia is a natural waste product excreted by fish that is lethal to aquatic life at relatively low concentrations. Ammonia-oxidizing archaea (AOA) outnumber ammonia-oxidizing bacteria (AOB) in biofilters of mature freshwater aquaria with low-ammonia conditions. However, no study has investigated the early establishment of AOA and AOB within biofilter communities, especially when aquarium ammonia concentrations are elevated. My thesis research investigated the relative abundance of AOA and AOB in freshwater aquarium biofilters through early aquarium establishment. AOA and AOB genes were detected in DNA extracts from the biofilters of 14 start-up freshwater aquaria with increasing fish biomass loads (Experiment 1), as well as from 12 biofilters of start-up aquaria treated with AOA and AOB supplements (Experiment 2). In start-up aquaria, early ammonia concentrations increased with fish biomass, and AOB amoA genes were strongly detected over AOA marker genes in all filters without initial AOA inoculation. Inoculation of AOA-dominated supplements into newly established biofilters improved early ammonia oxidation rates in comparison to filters supplemented with AOB or those lacking supplements. Inoculated AOA thrived in filter biofilm during and beyond stabilization of low-ammonia conditions in aquaria. Microbial activity experiments demonstrated that AOA were present and active in the biofilters eight months after inoculation, when aquaria were fully established. In addition, AOB and AOA populations were monitored in new aquaria in three unregulated home environments. Thaumarchaeal 16S rRNA genes were detected in all aquarium filters within one month of aquarium development. In one filter, AOA were the only ammonia-oxidizers detected in the biofilm during aquarium development, suggesting that AOA were the sole contributors to nitrification in this aquarium. The results from these experiments suggest that AOA may be key players in early aquarium nitrification once introduced into the aquarium environment. Further, this research provides insight into the ecology of AOB and AOA in engineered freshwater environments