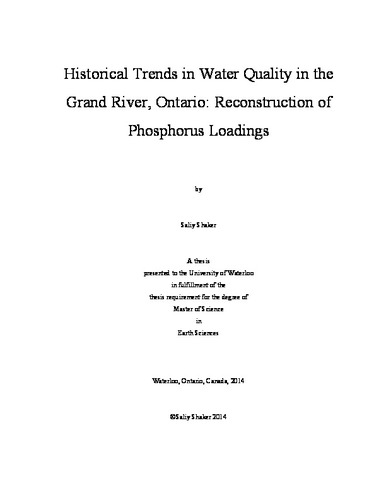 Phosphorus, a mineral nutrient, is an essential element in aquatic systems. It is only available for biological activity in the form of orthophosphate and soluble restrictive phosphate. Eutrophication, caused by nutrient enrichment, is a problem in many freshwater systems, which results in increased algal blooms, anoxic conditions, and consequently, biodiversity loss and ecosystem failure. Low dissolved oxygen levels trigger the release of sediment bound phosphorus, which reinforces eutrophication. Nutrients in aquatic systems are provided by point and non-point sources and these sources can be affected by several factors, including population, land-use, and climate change. There are many long-term historical phosphorus studies on rivers, but there are very few that are conducted on the Grand River watershed and none that look at factors that might be driving the phosphorus loadings. The Grand River watershed, located in Ontario, Canada, is a highly agricultural watershed with a growing population of approximately one million. It has experienced eutrophication, which has led to excessive production of cyanobacteria and regions of hypoxia. In this study, historical phosphorus concentration data (Total Phosphorus, Soluble Reactive Phosphorus, and Particulate Phosphorus) in five sites along the Grand River were analyzed temporally and spatially from 1965 to 2010 in the upper, middle, and lower parts of the watershed. The Particulate Phosphorus was calculated by subtracting SRP from TP. Several other data such as climate, land-use, geology, and population were also explored and considered as possible factors that may have influenced the trends over time. TP, SRP, and PP average flow weighted concentrations and fluxes were calculated in 2-6 year intervals. SRP load was higher prior to the early 1970’s, declined in the 1970’s, was more stable in the 1980’s and 1990’s, and increased in the 2000’s. The initial decrease in SRP in the early 1970’s was likely due to the phosphorus ban in detergents in 1973 that was implemented over several years. The constant SRP loadings in the 1980’s and 1990’s, despite population and urban development growth, may have been due to upgrades in waste water treatment plants during that time period. The recent increase in phosphorus in more recent years coincides with a large increase in the number of livestock in the 2000’s and population growth. SRP and PP loads increase from upstream to downstream regions are likely due to nutrient accumulation by the river. The higher loads and concentrations of SRP in the CGR is expected because the region is highly urbanized and contains most of the tile drainage in the watershed.