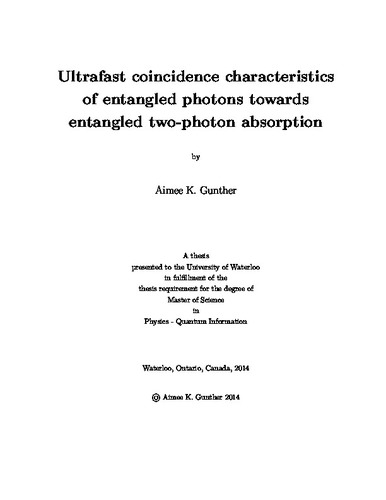 Nonlinear optics has had extensive application into a vast array of scientific fields. One such nonlinear process, two-photon absorption (TPA), has had a wildly successful adoption into the field of biological imaging and microscopy. As far and as fast as this field is progressing, limitations stemming from the use of ultrafast lasers are starting to appear. In this work, an alternative nonclassical light source will be motivated for the application of low photon-flux two-photon microscopy. The origin and properties of the chosen nonclassical source, spontaneous parametric downconversion (SPDC), will be discussed along with the spatial and spectral properties modelled. Nonlinear processes such as TPA and sum frequency generation (SFG) will be viewed as "ultrafast coincidence measurements" of two photons arriving at a molecule within the time window of excitation. These ultrafast coincidence measurements will be viewed in an alternative manner: in terms of the second-order coherence from a light source. This degree of second-order coherence can be subdivided into two categories arising from different combinations of correlations within and between entangled photon pairs. Of interest, the energy-time correlations within the photon pair allow for enhancements in ultrafast coincidence rates over coherent light sources. The makings of an experimental setup to demonstrate enhanced rates from ultrafast two-photon coincidences taking place in SFG in a nonlinear crystal will be discussed.