Agency Through Adaptation: Explaining The Rockefeller and Gates Foundation’s Influence in the Governance of Global Health and Agricultural Development 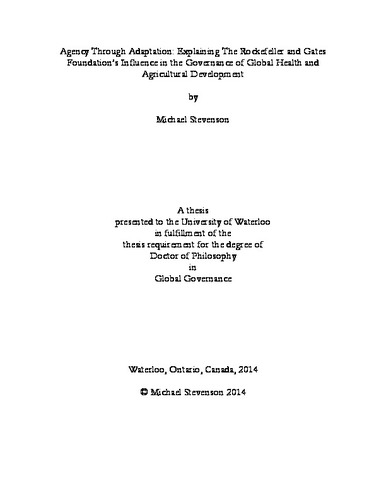 The central argument that I advance in this dissertation is that the influence of the Rockefeller Foundation (RF) and the Bill and Melinda Gates Foundation (BMGF) in the governance of global health and agricultural development has been derived from their ability to advance knowledge structures crafted to accommodate the preferences of the dominant states operating within the contexts where they have sought to catalyze change. Consequently, this dissertation provides a new way of conceptualizing knowledge power broadly conceived as well as private governance as it relates to the provision of public goods. In the first half of the twentieth-century, RF funds drove scientific research that produced tangible solutions, such as vaccines and high-yielding seed varieties, to longstanding problems undermining the health and wealth of developing countries emerging from the clutches of colonialism. At the country-level, the Foundation provided advanced training to a generation of agricultural scientists and health practitioners, and RF expertise was also pivotal to the creation of specialized International Organizations (IOs) for health (e.g. the League of Nations Health Organization) and agriculture (e.g. the Consultative Group on International Agricultural Research) as well as many informal international networks of experts working to solve common problems. Finally in the neo-liberal era, RF effectively demonstrated how the public-private partnership paradigm could provide public goods in the face of externally imposed austerity constraining public sector capacity and the failure of the free-market to meet the needs of populations with limited purchasing power. Since its inception, the BMGF has demonstrated a similar commitment to underwriting innovation through science oriented towards reducing global health disparities and increasing agricultural productivity in poor countries, and has greatly expanded the application of the Public-Private Partnership (PPP) approach in both health and agriculture. Unlike its intellectual forebear, BMGF has been far more focused on end-points and silver bullets than investing directly in the training of human resources. Moreover whereas RF has for most of its history decentralized its staff, those of BMGF have been concentrated mainly at its headquarters in Seattle. With no operational programs of its own, BMGF has instead relied heavily on external consultants to inform its programs and remains dependent on intermediary organizations to implement its grants. Despite these and other differences, both RF and BMGF have exhibited a common capacity to catalyse institutional innovation that has benefited historically marginalized populations in the absence of structural changes to the dominant global power structure. A preference for compromise over contestation, coupled with a capacity for enabling innovation in science and governance, has resulted in broad acceptance for RF and BMGF knowledge structures within both state and international policy arenas. This acceptance has translated into both Foundations having direct influence over (i) how major challenges related to disease and agriculture facing the global south are understood (i.e. the determinants and viable solutions); (ii) what types of knowledge matters for solving said problems (i.e. who leads); and (iii) how collective action focused on addressing these problems is structured (i.e. the institutional frameworks).

Michael Stevenson (2014). Agency Through Adaptation: Explaining The Rockefeller and Gates Foundation’s Influence in the Governance of Global Health and Agricultural Development. UWSpace. http://hdl.handle.net/10012/8233