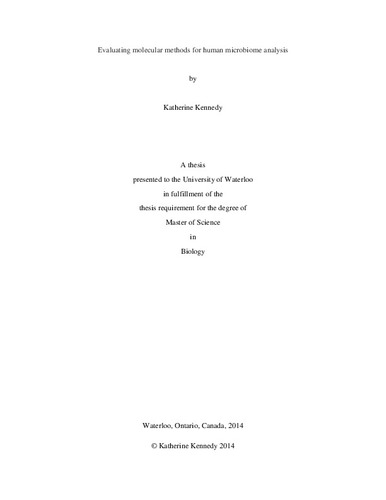 In human microbiome analysis, sequencing of bacterial 16S rRNA genes has revealed a role for the gut microbiota in maintaining health and contributing to various pathologies. Novel community analysis techniques must be evaluated in terms of bias, sensitivity, and reproducibility and compared to existing techniques to be effectively implemented. Next- generation sequencing technologies offer many advantages over traditional fingerprinting methods, but this extensive evaluation required for the most efficacious use of data has not been performed previously. Illumina libraries were generated from the V3 region of the 16S rRNA gene of samples taken from 12 unique sites within the gastrointestinal tract for each of 4 individuals. Fingerprint data were generated from these samples and prominent bands were sequenced. Sequenced bands were matched with OTUs within their respective libraries. The results demonstrate that denaturing gradient gel electrophoresis (DGGE) represents relatively abundant bacterial taxa (>0.1%) beta-diversity of all samples was compared using Principal Coordinates Analysis (PCoA) of UniFrac distances and Multi-Response Permutation Procedure (MRPP) was applied to measure sample cluster strength and significance; indicator species analysis of fingerprint bands and Illumina OTUs were also compared. The results demonstrate overall similarities between community profiling methods but also indicate that sequence data were not subject to the same limitations observed with the DGGE method (i.e., only abundant taxa bands are resolved, unable to distinguish disparate samples). In addition, the effect of stochastic fluctuations in ␣␣␣␣␣␣␣␣␣␣␣␣␣␣␣␣␣␣␣␣␣␣␣␣␣␣␣␣␣␣␣␣␣␣␣␣␣␣␣␣␣␣␣␣␣␣␣␣␣␣␣␣␣␣␣␣␣␣␣␣␣␣␣␣␣␣␣␣ differ for DGGE and next-generation sequencing. I compared pooled and individual reactions for samples of high and low template concentration for both Illumina and DGGE using the combined V3-V4 region of the 16S rRNA gene, and demonstrated that template concentration has a greater impact on reproducibility than pooling. This research shows congruity between two disparate molecular methods, identifies sources of bias, and establishes new guidelines for minimizing bias in microbial community analyses.