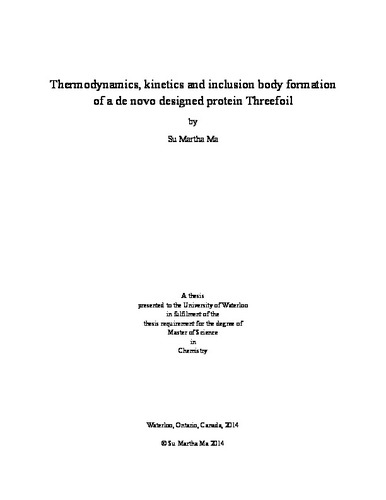 Threefoil is a small engineered protein of 141 amino acids which is a member of the beta-trefoil superfamily, with three-fold symmetry and high thermal and kinetic stability. Its primary sequence was designed based on a predicted beta-trefoil glycosidase from the halophilic Archaeon Haloarcula marismortui. Threefoil predominantly forms inclusion bodies when over-expressed in Escherichia coli at 37°C, with little to no protein soluble in the cytoplasm. Nevertheless, Threefoil is capable of adopting a native beta-trefoil structure when refolded from solubilized inclusion bodies. The focus of this thesis is on characterization of the folding and stability of Threefoil through thermodynamic and kinetic experiments for wild-type Threefoil, in addition to sugar- and metal-binding studies and characterization of Threefoil inclusion bodies. Various Threefoil mutants, designed to increase protein stability, are also characterized to probe the origins of, as well as to give insight into, the mechanism of inclusion body formation. The thermodynamic and kinetic stability of wild-type Threefoil was studied using spectral probes, mainly fluorescence, circular dichroism (CD) and dynamic light scattering (DLS). The major observed spectral changes in kinetic and thermodynamic experiments can be fit to a 2-state transition between the folded state and a denatured state containing extensive residual secondary structure. At high protein concentrations, the folding of wild-type Threefoil is complicated by protein misfolding and aggregation. As Threefoil is remarkably resistant to denaturation even at high concentrations of urea and guanidine hydrochloride (GuHCl), studies were also conducted in guanidine isothiocyanate (GuSCN), which is a much stronger denaturant than urea and GuHCl. Remarkably, the time that is required for Threefoil samples to reach equilibrium in renaturation curves is approximately 100 days, while equilibrium by denaturation in the stronger denaturant, GuSCN, requires more than two years. The expression levels of Threefoil mutants A62V, Q78I, D85P and D93P were also studied. None of the four mutants studied exhibited any pronounced increase in solubility compared to wild-type when expressed in E. coli.