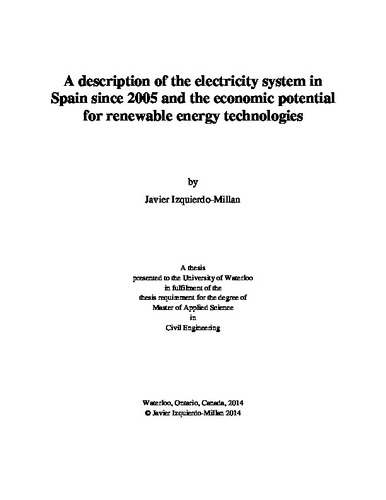 The energy system in Spain can be characterized as being high energy intensive when compared to the rest of Europe and because of its high dependence on imported resources (around 84%). The focus of this document is to explore a novel approach to describe, as part of this energy system, the electricity system in Spain since 2005 and the economic potential for renewable energy technologies (RET) to replace the electricity generated from fossil resources by 2050. The heart of the design and implementation of any RET policy should be the reduction or elimination of fossil fuel dependency. This document aims at describing the evolution of the Spanish electricity system in the last decade, and addressing the possible influence of certain factors in the design and implementation of the electricity system by using modern modeling technologies to evaluate the potential of RET. This will represent a novel approach to bridge the results from modeling technologies to policy makers. To ensure the credibility and reliability of the data researched, validation criteria has been used which includes the accuracy of information, the content (whether factual or opinion), time (limited to certain periods), format (validity of internet sources, journals, etc), authority (reputable authors and sources), objective reasoning, currency and links to other resources, and the quality of writings and its review among others. The proposed research approach follows a methodology where the first step is to understand the electricity system in Spain, followed by the definition of the model of interest (optimization models) and the design of three different scenarios (Business as Usual, FIT and High fossil prices) for the evaluation of the potential of RET, finishing with the analysis of the results from the model and data collected from the perspectives of what has been done in previous RET policies and plans, and the possible influence of factors such as organizations and corporations on those policies and plans. The results obtained from the model are analysed and compared to the Business as Usual scenario. The amount of electricity generated from fossil resources and to be replaced by RET is calculated using the scenarios, as well as the evolution of primary energy, imports, final energy consumptions and CO2 emissions. In order to test the applicability of this approach, the results of the model have been compared with the current situation of the Spanish electricity system. Calculations using capacity factors of the RET and their share in the current electricity generation are performed in order to identify the final amount of power (MW) to be installed in order to replace the electricity generated (GWh) by fossil resources by 2050. Based on the conclusions, RET has the potential to replace the generation of electricity from fossil fuels but improvements in the efficiency of RET will be needed. In addition, it is recommended that significant considerations in RET policy like the energy and electricity systems should be a strategic component of the Spanish policy system, be done in order to set the Spanish electricity system in a more sustainable path .

Javier Izquierdo-Millan (2014). A description of the electricity system in Spain since 2005 and the economic potential for renewable energy technologies. UWSpace. http://hdl.handle.net/10012/8228