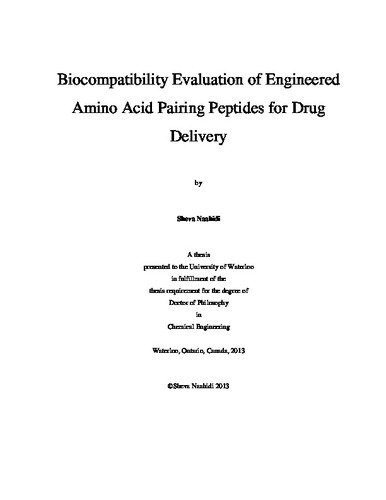 To ensure the effective and safe use of nanomaterials for medical applications, the biocompatibility of the materials must be tested with particular relevance to the environment in which the material is placed. In nanoparticle-based drug delivery, it is crucial to evaluate a nanoparticle’s biocompatibility to ensure minimal cytotoxicity. Of several types of nanoparticles, peptide-based nanoparticles have emerged as promising systems for targeted cancer therapy. Yet, the biocompatibility of many of these peptides and their assembled particles has not been studied. This thesis, summarizes the original contribution on the effective and safe use of the particular self/co-assembling, amino acid pairing peptides and some of their DEGylated forms (modified versions) as carriers for anticancer drug delivery application. Therefore, the biocompatibility of the self-assembling, amino acid pairing (AAP) peptides AC8, its two DEGylated forms, as well as two related peptides, EAK16-II and EK8, is systematically investigated. The toxicity of these peptides and their complexes with pirarubicin was tested against the human adenocarcinoma lung cancer cell line, A549.The biocompatibility of the peptide-drug co-assembling complexes is assessed and the potential of these five peptides as carriers for the hydrophobic anticancer drug pirarubicin is demonstrated. For the first time experimental results on cytotoxicity, haemolytic activity, red blood cell (RBC) aggregation, complement activation and anaphylotoxin activation as an end result of complement activity for these five AAP peptides is reported. AC8, the amino end DEGylated AC8 (NP-I) and EK might be strong candidates for hydrophobic drug delivery considering their lack of toxicity and the fact that they are not recognized as a foreign molecule, inducing no considerable immune reactions. These results provide a basis for in vivo experiments and predict minimal in vitro toxicity of these peptides based delivery systems.