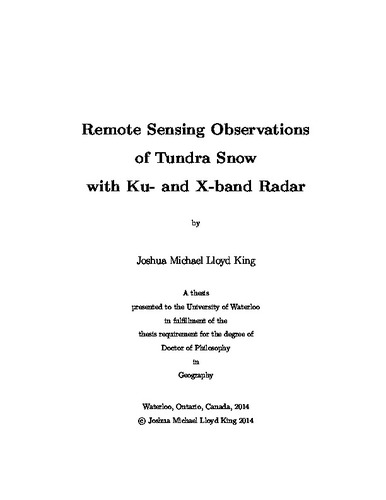 Seasonal patterns of snow accumulation in the Northern Hemisphere are changing in response to variations in Arctic climate. These changes have the potential to influence global climate, regional hydrology, and sensitive ecosystems as they become more pronounced. To refine our understanding of the role of snow in the Earth system, improved methods to characterize global changes in snow extent and mass are needed. Current space-borne observations and ground-based measurement networks lack the spatial resolution to characterize changes in volumetric snow properties at the scale of ground observed variation. Recently, radar has emerged as a potential complement to existing observation methods with demonstrated sensitivity to snow volume at high spatial resolutions (< 200 m). In 2009, this potential was recognized by the proposed European Space Agency Earth Explorer mission, the Cold Regions High Resolution Hydrology Observatory (CoReH2O); a satellite based dual frequency (17.2 and 9.6 GHz) radar for observation of cryospheric variables including snow water equivalent (SWE). Despite increasing international attention, snow-radar interactions specific to many snow cover types remain unevaluated at 17.2 or 9.6 GHz, including those common to the Canadian tundra. This thesis aimed to use field-based experimentation to close gaps in knowledge regarding snow-microwave interaction and to improve our understanding of how these interactions could be exploited to retrieve snow properties in tundra environments. Between September 2009 and March 2011, a pair of multi-objective field campaigns were conducted in Churchill, Manitoba, Canada to collect snow, ice, and radar measurements in a number of unique sub-arctic environments. Three distinct experiments were undertaken to characterize and evaluate snow-radar response using novel seasonal, spatial, and destructive sampling methods in previously untested terrestrial tundra environments. Common to each experiment was the deployment of a sled-mounted dual-frequency (17.2 and 9.6 GHz) scatterometer system known as UW-Scat. This adaptable ground-based radar system was used to collect backscatter measurements across a range of representative tundra snow conditions at remote terrestrial sites. The assembled set of measurements provide an extensive database from which to evaluate the influence of seasonal processes of snow accumulation and metamorphosis on radar response. Several advancements to our understanding of snow-radar interaction were made in this thesis. First, proof-of-concept experiments were used to establish seasonal and spatial observation protocols for ground-based evaluation. These initial experiments identified the presence of frequency dependent sensitivity to evolving snow properties in terrestrial environments. Expanding upon the preliminary experiments, a seasonal observation protocol was used to demonstrate for the first time Ku-band and X-band sensitivity to evolving snow properties at a coastal tundra observation site. Over a 5 month period, 13 discrete scatterometer observations were collected at an undisturbed snow target where Ku-band measurements were shown to hold strong sensitivity to increasing snow depth and water equivalent. Analysis of longer wavelength X-band measurements was complicated by soil response not easily separable from the target snow signal. Definitive evidence of snow volume scattering was shown by removing the snowpack from the field of view which resulted in a significant reduction in backscatter at both frequencies. An additional set of distributed snow covered tundra targets were evaluated to increase knowledge of spatiotemporal Ku-band interactions. In this experiment strong sensitivities to increasing depth and SWE were again demonstrated. To further evaluate the influence of tundra snow variability, detailed characterization of snow stratigraphy was completed within the sensor field of view and compared against collocated backscatter response. These experiments demonstrated Ku-band sensitivity to changes in tundra snow properties observed over short distances. A contrasting homogeneous snowpack showed a reduction in variation of the radar signal in comparison to a highly variable open tundra site. Overall, the results of this thesis support the single frequency Ku-band (17.2 GHz) retrieval of shallow tundra snow properties and encourage further study of X-band interactions to aid in decomposition of the desired snow volume signal.