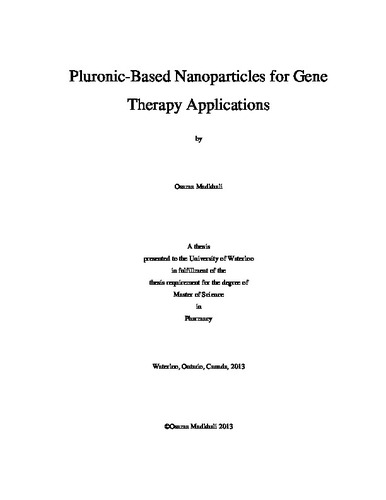 Non-viral delivery vectors have potential advantages over the viral systems that currently are used extensively for delivering therapeutic genes of interest. However, non-viral gene therapy has low efficiencies in vivo, in part due to the aggregation of the particles in the delivery system associated with serum proteins and other components of the blood. An effective technique for overcoming this problem to use PluronicTM block copolymers to cover the surfaces of the particles in the delivery system with polyethylene oxide, which decreases their charge density and reduces their interactions with the serum proteins. The objectives of this project were to characterize a Pluronic-gemini surfactant system to be used as non-viral vectors for gene therapy. Five Pluronics (L44, F68, F87, F108, and F127) were evaluated by studying their physiochemical properties, including particle size and zeta potential. Also, these systems were evaluated in OVCAR-3 cell culture for gene expression and cell viability. The in vitro systems showed small particle sizes (approximately 200 nm) for all Pluronics. The particle sizes in the systems were increased dramatically (up to 2000 nm) by adding dioleylphosphatidylethanolamine (DOPE) to the systems. The zeta potential of these systems shifted the negative zeta potential of DNA (-43 mV) to a positive value (+35 mV). The addition of DOPE had very little effect on zeta potential. The in vitro transfection efficiency in OVCAR-3 showed that all of the Pluronics were able to transfect OVCAR-3 at various DNA/gemini surfactant ratios. The highest transfection efficiency was obtained with Pluronics L44, F87 and F108. PluronicF127 demonstrated the lowest transfection efficiency among the five Pluronics. Adding DOPE did not improve the transfection efficiency in any of the pluronic-gemini surfactant systems. The viabilities of the cells in these systems were high, and there were greater than the positive control (Lipofectamine 2000). The greatest cell viability (about 60%) was observed when the DNA to gemini surfactant ratio was 1:2. After adding DOPE, the cell viability decreased in all of the Pluronics except for Pluronic F68. The results of this investigation indicated that Pluronic block copolymers can transfect OVCAR-3 cell cultures in vitro and that they had a low level of cytotoxicity.