Methylmercury Production in Riverbank Sediments of the South River, Virginia (USA) and Assessment of Biochar as a Mercury Treatment Option 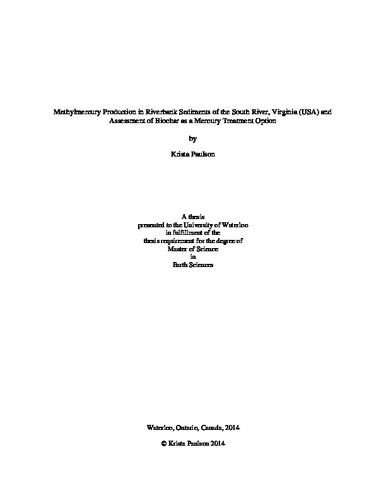 Mercury (Hg) is a toxic element which bioaccumulates in the food chain when methylated and poses a health risk to the human population mainly through fish consumption. It is released into the environment through both natural and anthropogenic processes. Remediation of river systems contaminated with Hg presents challenges due to complexities associated with dynamic transport and deposition processes and cyclic methylation. The South River watershed in Virginia, USA contains elevated concentrations of Hg within sediment and floodplain soils as a result of historical releases from a textile manufacturing plant from 1929-1950. Methylation of Hg is a bacterially mediated process which is controlled by the availability of electron donors, electron acceptors and Hg, amongst other factors. To evaluate the factors controlling Hg methylation at the South River site, four column experiments were conducted that involved saturating site sediments with South River water, followed by subjecting the columns to influent solution containing differing organic carbon and sulfate amendments. These amendments included acetate, lactate, and lactate combined with excess SO42- and the production of MeHg relative to a control was monitored both spatially and temporally. Production of MeHg was observed in all four columns, with the lowest mass found in the effluent generated by the control column (8.7 ng L-1), and a slightly higher mass in the acetate and lactate amended column effluents (53.7 ng L-1 and 30.1 ng L-1 reached respectively). The aqueous MeHg in the column amended with lactate and SO42- reached a maximum of 4910 ng L-1 near the output of the column. The results from these column experiments suggest that excess SO42- did not inhibit methylation under saturated flow conditions in the South River sediments. The bacterial species Desulfovibrio putealis, Geobacter spp., Desulfobacterium and Desulfosporosinus were identified in the column sediments and are potential contributors to the observed Hg methylation. Experiments were conducted to evaluate the potential removal of Hg and MeHg from sediment pore water. The experiments consisted of two columns connected in series. The first column contained Hg-bearing sediment with South River water as an influent solution to provide a source of Hg for the treatment column. The effluent from the first column was then connected to a treatment column which contained 1:1 volume ratio of biochar and silica sand. This treatment column was loaded with Hg for 182 pore volumes, disconnected, and then subjected to new influent solutions consisting of first background river water and then simulated acid rain water. The purpose was to determine the potential of the biochar material to retain Hg under saturated flow conditions. No significant release of Hg was observed in the column effluent with the South River water. After the influent was switched to simulated acid rain water (pH ~ 4.6), there was an increase in Hg concentrations in the column effluent for one sampling period, but then the unfiltered and 0.45 m filtered Hg concentrations returned to < 8.5 ng L-1. Total Hg extractions on the biochar column material at four locations suggested that the majority of the Hg in the column resided in the first 5 cm of material even after influent perturbations, with a maximum of 0.26 g g-1 dry weight in the 2 cm closest to the influent. Mercury sequential extraction results on the biochar material at the termination of the column revealed the majority (67%) of the Hg on the biochar material was removed with 12 M HNO3 (F4 fraction), followed by 0.1 M KOH (F3 fraction) at 31%. Less than 1.2% of the THg was removed after subjecting the biochar material to deionized water (F1 fraction) and 0.01M HCl + 0.1M CH3COOH (F2 fraction). A solid-phase analysis of MeHg on the same biochar material resulted in a concentration of 0.20 ng g-1 dry weight, or <0.08% of total solid-phase Hg. These results suggest that application of biochar may represent an effective approach for treating Hg in passive flow through systems.