A Study in Paleo-Oncology: On the Identification of Neoplastic Disease in Archaeological Bone 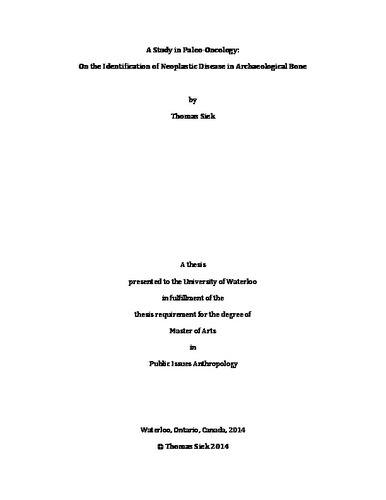 Humans have experienced neoplastic disease since antiquity as evidenced by its frequent mentions in numerous ancient medical texts from diverse cultures. However, the skeletal record does not always corroborate this fact, as archaeological cases of neoplasms are not found as often as other more recognizable diseases. Numerous reasons have been given for this disparity ranging from cancer killing the individual before skeletal lesions could form to the idea that tumours simply do not survive in the archaeological record. As such neoplasms are not often considered when constructing a differential diagnosis and to a larger extent the disease is considered to be a product of the modern age. This thesis examines the identification of neoplasms in archaeological bone using clinical data and comparison to medically diagnosed cancer cases from the University of Athens Human Skeletal Reference Collection. I also developed diagnostic criteria and data forms specifically designed to record and describe neoplastic lesions. This enabled me to develop differential diagnoses for suspected cancer cases in skeletons from the Athenian Agora, ancient Corinth, the Wiener Laboratory at the American School of Classical Studies in Athens and the Anthropology Department of the University of Waterloo. Using the comparative collection, I worked toward identifying characteristics that would make it possible to identify neoplastic lesions and distinguish between primary and secondary malignancies. An unexpected finding was demonstrating that lesions associated with leukemia are similar to those of scurvy, a metabolic disease, and must be considered in differential diagnoses. The methods I employed may be applied elsewhere to other suspected cases of cancer and thus enable more research in cancer’s prevalence in antiquity. This will support the public issue that cancer is not a disease of modernity and that attempts to treat and understand this disease has always been a part of medical history.

Thomas James Siek (2014). A Study in Paleo-Oncology: On the Identification of Neoplastic Disease in Archaeological Bone. UWSpace. http://hdl.handle.net/10012/8211