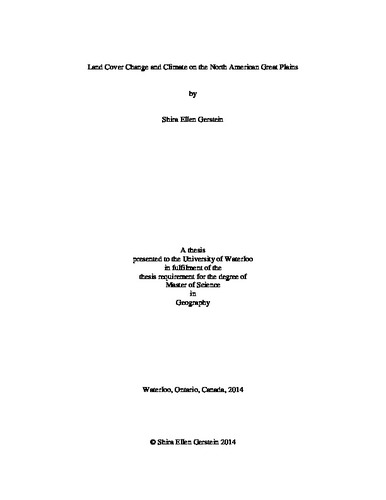 Changing land cover from prairie grasslands to intensive, primarily cereal agriculture, over the North American Great Plains since the mid-19th century, has had a hydrological and climatological impact on that ecosystem (Pielke, Sr., et al., 2011). Agriculture has introduced timed harvest seasons, irrigation, and C3 photosynthesizing crops with poorer water efficiency than the grasses it replaced. All of these changes have been linked to exacerbated drought conditions and warmer temperatures; however, few studies have quantified this relationship at the continental scale. In order to evaluate the change imposed by this shift in land use and land cover, the observation based 20th Century Reanalysis Project (20CR) was used to quantify the climatological differences in temperature and humidity between areas of natural prairie and agriculture over the 20th century. An additional analysis used the Observation Minus Reanalysis (OMR) technique to isolate the surface climate signal found in the 20CR. We find indications that changing land cover had an impact on climate. However, using observation based data returned no evidence of a statistically significant change due to the small land use and land cover change (LULCC) signal within the larger climate noise. Therefore, an idealised modelling experiment was undertaken using the Geophysical Fluid Dynamics Laboratory (GFDL) AM2-LM2 atmosphere-land model to remove these other influences. This experiment compared the results of two model simulations: one where the entirety of the prairie was preserved as grassland (GRASS), and another where the entire prairies had been converted into an agricultural area (AGRIC). Relative to GRASS, the AGRIC simulation has reduced surface albedo and root zone depth, and increased roughness length over the prairies, which collectively cause a significant summer drying. This occurs when the shallower rooting zone limited potential evapotranspiration (PET) forcing the additional energy created by turbulent mixing and a lower surface albedo to warm the air, surpassing PET and reaching drier conditions faster. While not conclusive, the results presented in this thesis represent a step towards filling the gaps in understanding land-atmosphere interactions and connecting LULCC to climate.