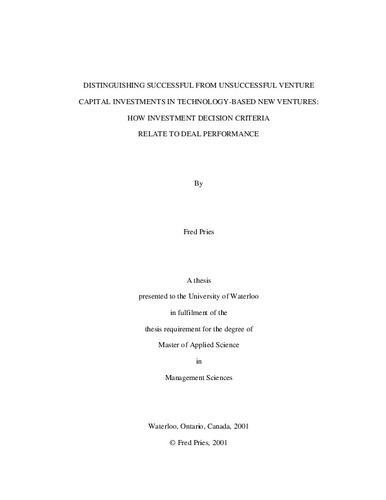 This study investigates variability in the importance of investment decision criteria used by venture capitalists in assessing new technology-based ventures and relates the criteria to the subsequent performance of the investment in the new venture. Variability was measured using interval and ordinal scale approaches for both criteria ratings and rankings. The analyses found that the criteria used by venture capitalists form a general hierarchy that is consistently ranked across ventures. However, there are some criteria that do not form part of this hierarchy and whose importance varies depending on the specific venture being evaluated. The criteria that are consistently considered important by venture capitalists can be thought of as necessary conditions for investment. The hypotheses concerning the relationship between the criteria and subsequent deal performance are that:· deal performance can be assessed by venture capitalists earlier for Internet-related ventures than for other-technology based ventures (H1);· Internet-related ventures have more extreme levels of deal performance (H2);· a small number of criteria will distinguish between successful and unsuccessful deal performance (H3);· criteria that do distinguish have above average variability (H4); and· criteria related to first-mover advantage distinguish between successful and unsuccessful deals (H5). The study was conducted in two parts. The original study (n=100) conducted by Bachher (2000) gathered information about the importance of the investment criteria using a web-based survey. The follow-up study (n=40) gathered information about the success of the investments by surveying the original participants and gathering information from the Internet. Limitations of the study include a nonrandom sample, a small sample size for the follow-up survey and the very small number (n=5) of unsuccessful investments identified. Evidence for hypotheses H1 and H2 was in the predicted direction but failed to achieve statistical significance. The evidence is supportive of H3. Evidence for H4 and H5 was not found. Additional analysis of the results suggests that venture capitalists whose investments were ultimately unsuccessful placed less importance on technology-related criteria than did venture capitalists investing in the other ventures. This finding implies that venture capitalists need to perform detailed assessments of the technology of new ventures.