Sympathetic Landscapes: an aesthetics for the Leslie Street Spit 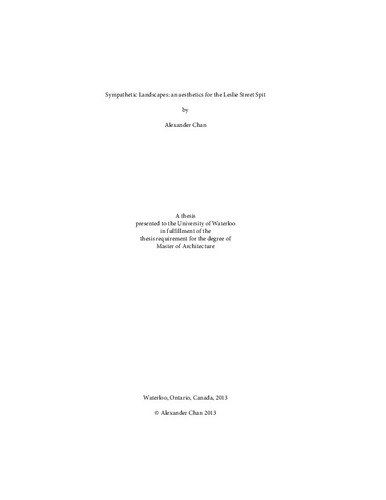 The Leslie Street Spit is a five kilometre rubble breakwater on the eastern waterfront of Toronto. Built during the mid-twentieth-century as an infrastructural add-on to the existing Port Lands Industrial District, the artificial peninsula was a lakefilling project made to realize the city’s ambitious desire for economic prosperity and world-class prestige by expanding its existing harbour facilities. With the decline of Toronto’s shipping industry, the Leslie Spit remained an active dump site for urban clean fill until it was unexpectedly colonized by flora and fauna during the 1970s. The site is now recognized as an important local and international environmental resource. Visitors to the Leslie Spit experience a diverse landscape of ecosystems and industrial rubble helded by the city as a symbol of environmental revival within a former industrial region undergoing another phase of urbanization. While the local aesthetic experience of the headland is pleasurable and aligns with the reinvention of Toronto as am environmentally conscious and sustainable city, human visitors remain psychologically and physically removed from the inhabiting non-human life. Occasionally, the desire to conserve and preserve the natural world requires a separation between humans and non-humans. This relationship is carried out in varying degrees on the Leslie Spit. This thesis documents events at the headland where the human/non-human divide is rigidly enforced or left ambiguous. The purpose of the thesis is not to treat the headland as an eccentric spectacle, but to investigate the unexpected coexistence between humans and non-humans.