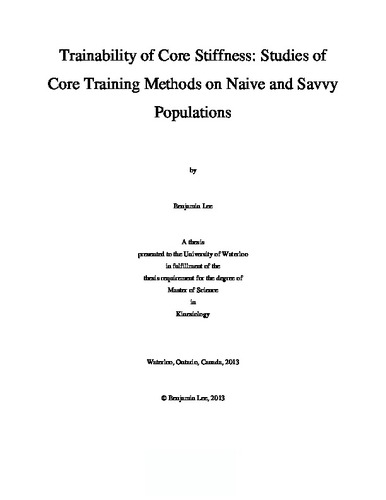 Core exercise is a staple of many physical training regimens with goals ranging from improving athletic performance to rehabilitation of spine and knee injuries. Traditionally, dynamic movements such as flexion, lateral bending and twisting core exercise maneuvers are used in training programs; an approach consistent with training the distal limbs where muscular effort is mostly devoted to creating motion. However, knowledge of the functional anatomy of core musculature and spine injury mechanisms questions the use of these types of exercises. Alternative core exercises make use of isometric postures and static bracing to create muscular activation while minimizing spine loads and injury mechanisms linked with movement. This study aims to quantify the effect of various core training programs on the change of passive and active stiffness properties of the torso. This study was driven by several curiosities: 1) Isometric core exercises are reported to help some people who have low back pain. Is there a short lasting ‘enhanced stiffness’ after performing these exercises? 2) Core training regimens use Isometric and Dynamic core exercises to enhance core bracing properties. Is one method superior to the other in terms of enhancing core stiffness? 3) If adaptations to core stiffness can be achieved with core exercise, do these adaptations differ between beginners and trained individuals? Twenty four healthy male subjects (22.9 ± 2.7 years, 1.79 ± 0.06 m, 77.5 ± 10.8 kg) were recruited for short and long term core training. Of the overall population, twelve subjects (21.7 ± 1.89 years, 1.80 ± 0.076 m, 78.3 ± 12.3 kg) were University students with little to no experience in performing regular core exercise. The other twelve subjects (24.2 ± 2.89 years, 1.79 ± 0.047 m, 76.8 ± 9.71 kg) were athletically trained with at least one year of experience performing regular core exercise (minimum three times per week). This study was a repeated measures design examining short and long term core stiffness (active and passive) and range of motion before and after a single fifteen minute bout of isometric core exercise and a six week core training program. The long term training groups were divided evenly into isometric, dynamic and control groups. The Isometric group received a six week training program consisting of core bracing exercises ranging from basic static bodyweight exercises to weighted exercises with additional challenge of distal limb mobility while maintaining a braced core, while dynamic group exercises consisted of movement and speed based core exercises. The Control group received no further training during this period. All subjects were asked to refrain from any extra core demands not given by the researchers. After the training period was complete all subjects were retested for stiffness and range of motion. Passive stiffness tests were performed using a frictionless bending apparatus for flexion, extension, left and right lateral bend and left and right axial twist directions. Active stiffness was assessed via a ‘quick release’ mechanism, preloaded with a 16 kg mass and randomly released to assess active extension. Participants were instrumented with unilateral electromyography (EMG) of selected core musculature and electromagnetic signals for motion capture for lumbar kinematics. To determine if training had an effect on dependent variables a series of repeated measures ANOVAs were performed; short term training utilized a 2x2 Repeated Measures ANOVA using the pre/post condition and training experience (naïve vs. savvy) as factors. Long term training utilized a 3x2x2 Repeated Measures ANOVA using training group (Isometric vs. Dynamic vs. Control), training experience (naïve vs. savvy) and pre/post condition as factors. In general, short term isometric core training increased core stiffness in all directions for naïve and savvy subjects. Comparisons between these two subject groups did not yield any significant differences. After long term training stiffness was increased the greatest in the Isometric training group with both naïve and savvy subjects. Dynamic training yielded significant increases in stiffness but for only one direction in each subject group (right lateral bend in naïve subjects and left axial twist in savvy subjects). The Control group did not show any significant changes in stiffness. Comparisons between training groups and training experience did not yield any significant differences. Isometric training lead to significant stiffness increases in all test except for passive and active extension in naïve subjects, and similar results were found for savvy subjects except for right lateral bend not showing any significant changes. Researchers believe reasons for insignificant changes are related to high variances which may be due to inadequate statistical power and a wide variety of responses within each subject group. Though some analyses showed inadequate statistical power due to small sample sizes it should be noted that this research is the first of its kind investigating the trainability of core stiffness in the short and long term, and thus difficult to establish sample sizes without any baseline values. The findings of this study can be directly applied to core training for rehabilitation and athletic function. Enhancements in core stiffness are thought to subsequently enhance traits such as load bearing ability, pain management and athletic function. The results of short term training give insight into how a short training session performed prior to a load bearing task can make the task safer and easier to perform. The results of long term training show that Isometric training performed over a long duration may induce more permanent enhancements to stiffness and core function.