In the Eye of the Beholder: Perceptions of Ecotourism in Algonquin Provincial Park 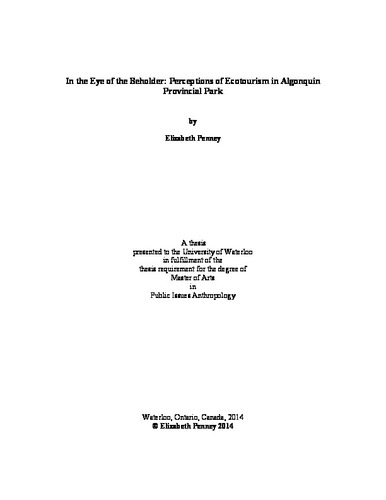 Since its inception, ecotourism has been promoted as a solution to some of the problems of biodiversity conservation. It has been touted as having the potential to balance the diverse interests of various publics by ensuring the protection of landscapes from development and extraction, offering unique tourism experiences, contributing economically to local communities, and fostering support for conservation efforts. Inconsistent success in achieving these goals, however, suggests that the effectiveness of ecotourism ought to be assessed on a case-specific rather than an industry-wide basis. Further, different stakeholders are likely to perceive the impacts of ecotourism in very different manners. The research on ecotourism and conservation rarely considers multiple perspectives, instead reflecting a one-sided understanding of the issues. As a step towards addressing these shortcomings, this thesis brings to light differing perspectives of ecotourism at the site of Algonquin Provincial Park. Through interviews and surveys, I uncover differences in conceptualisations of key ideas of conservation, knowledge of Algonquin Park, and perspectives of ecotourism between two primary groups of participants: tourists visiting the park and residents living in surrounding areas. Their responses reveal that, to residents, the park is a representation of livelihood; for tourists, the park represents “pristine nature.” The park is staged for its various publics, strategically representing only those aspects that will be looked upon favourably to a given group. These multiple constructions may be beneficial, however, as diverse viewpoints of these participants prompted attitudes and behaviours that were advantageous to the varied objectives of the park’s mandate, ultimately contributing to the success of the park as a site of landscape and biodiversity conservation.

Elizabeth Jane Penney (2014). In the Eye of the Beholder: Perceptions of Ecotourism in Algonquin Provincial Park. UWSpace. http://hdl.handle.net/10012/8203