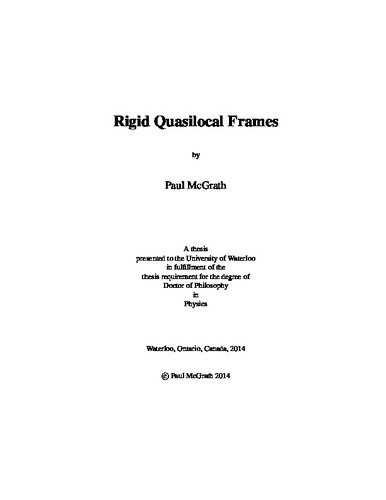 This thesis begins by introducing the concept of a rigid quasilocal frame (RQF) as a geometrically natural way to define an extended system in the context of the dynamical spacetime of general relativity. An RQF is defined as a two-parameter family of timelike worldlines comprising the worldtube boundary of the history of a finite spatial volume with the rigidity conditions that the congruence of worldlines is expansion-free (the ``size'' of the system is not changing) and shear-free (the ``shape'' of the system is not changing). We demonstrate that this frame exists in flat and arbitrary curved spacetimes and, moreover, exhibits the full six motional time-dependent degrees of freedom we are familiar with from Newtonian mechanics. The latter result is intimately connected with the fact that a spatial slice through the RQF - having a two-sphere topology - always admits precisely six conformal Killing vector (CKV) fields (three boosts and three rotations) associated with the action of the Lorentz group on a two-sphere. These CKVs, along with the four-velocity of observers on the RQF, are then used to quasilocally define the energy, momentum, and angular momentum inside an RQF without relying on the pre-general relativistic practice of appealing to spacetime symmetries. These quasilocal definitions for energy, momentum, and angular momentum also involve replacing the local matter-only stress-energy-momentum (SEM) tensor with the Brown-York matter plus gravity boundary SEM tensor. This allows for the construction of completely general conservation laws which describe the changes in a system in terms of fluxes across the boundary. Furthermore, since an RQF is a congruence with zero expansion and shear only relevant fluxes appear in these conservation laws - that is, fluxes due merely to changes in the size or shape of the boundary are eliminated. These resulting fluxes are simple, exact, and quantified in terms of operationally-defined geometrical quantities on the boundary and we show that they explain at a deeper level the mechanisms behind gravitational energy and momentum transfer by way of the equivalence principle. In particular, when we accelerate relative to a mass, the energy changes at a rate proportional to our acceleration times the momentum (and we propose an exact gravitational analogue of the electromagnetic Poynting vector to capture this idea). Similarly, the momentum of that object changes at a rate proportional to our acceleration times the energy. This new insight has fascinating consequences for how we should understand everyday occurrences like a falling apple - that is, the change in energy of the apple involves frame dragging while the change in momentum involves extrinsic curvature effects near the apple. Our naive general relativistic intuition tells us that these quantities should be so tiny that they should be negligible and, indeed, they are tiny but they are multiplied by huge numbers to give rise to macroscopic effects. This is how general relativity universally explains the transfer of energy and momentum but we needed rigid quasilocal frames to uncover this beautiful property of nature. Using the RQF formalism we also investigate a variety of specific problems. In particular, while looking at time-dependent rotations we discover that the reason Ehrenfest's rigid rotating disk paradox has gone unsolved for so long is that rotation introduces a subtle non-locality in time. By this we mean that, in order to maintain rigidity while undergoing time-dependent rotation, one needs to know, not only the instantaneous rotation rate, but the entire history of the motion. This makes it impossible to keep a volume of observers rigid but is doable with an RQF. We also consider RQFs in the small-sphere limit to derive many of our results and one example with particularly interesting consequences involves Bell's spaceship accelerating through an electromagnetic field. Here, we show that the change in electromagnetic energy inside the spaceship is made up of two pieces: the usual electromagnetic Poynting flux accounts for half the change while the gravitational Poynting vector equally contributes to make up the other half. This means that electromagnetism in flat spacetime generically does not tell you what is actually going on. Rather, the curvature due to the electromagnetic field necessitates a fully general relativistic treatment to get the whole story. We also use the RQF linear momentum conservation law in the context of stationary observers and fields to derive, for the first time, an exact fully general relativistic analogue of Archimedes' law. In essence, this law demonstrates that the weight of the matter and gravitational fields contained in a finite region of space is supported by the stresses (buoyant forces) acting on the boundary of that region. Furthermore, in a post-Newtonian approximation, we derive a simple set of quasilocal conservation laws which describe non-relativistic systems bound by mutual gravitational attraction. In turn, we use these laws to obtain expressions for the rates of gravitational energy and angular momentum transfer between two tidally interacting bodies - that is, the tidal heating and tidal torque - without the need to define unphysical pseudotensors. Moreover, the RQF approach explains these transfers of energy and momentum again, not as the difference of forces acting on a tidal bulge, but instead more fundamentally in the language of the equivalence principle in terms of ``accelerations relative to mass''. Throughout this work we demonstrate that the RQF approach always gives very simple, geometrical descriptions of the physical mechanisms at work in general relativity. Given that this approach also includes both matter and gravitational energy, momentum, and angular momentum and does not rely on spacetime symmetries to define these quantities, we argue that we are seeing here strong evidence that the universe is actually quasilocal in nature. We are really deeply ingrained with a local way of thinking, so shifting to a quasilocal mindset will require great effort, but we contend that it ultimately leads to a deeper understanding of the universe.