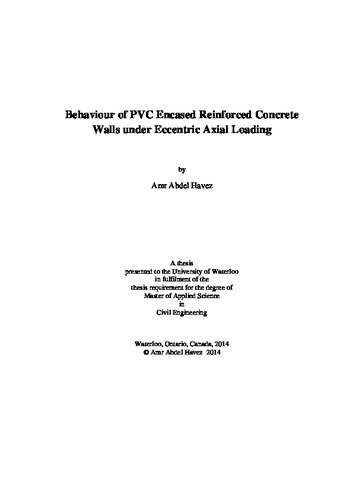 Stay-in-place (SIP) formwork has been used as an alternative to the conventional formwork system. The systems are mainly assembled on site, hence simplifying the construction process and reducing the construction time as the removal procedure has been eliminated. SIP formwork systems can be divided into two main categories; structural and non-structural formwork, based on their contribution to resist applied loads. The structural formwork provides the same advantages as the non-structural formwork, in addition to its contribution to resist the applied loads. As a result, the cross section and the reinforcement of the structural member can be reduced. Recently, polyvinyl chloride (PVC) has been used as a stay-in-place formwork because of its lower cost compared to other materials, durability, and ease to assemble. The PVC SIP formwork consists of interconnected elements; panels and connectors that serve as permanent formwork for the concrete walls. In this study, the behaviour of the PVC encased reinforced concrete walls under eccentric compression loading was investigated. The variables in this study were the type of the specimen (PVC encased or control), the longitudinal reinforcement (4-10M or 4-15M rebars) and the eccentricity of the applied compression load (33.87 mm, 67.73 mm and 101.6 mm). Generally, the control walls (without PVC encasement) failed by yielding of the steel followed by crushing of the concrete, or by crushing of the concrete without yielding of the steel. For the PVC encased walls, buckling of the PVC occurred after the concrete crushed. The PVC encased specimens showed a higher peak load than their peer control walls. The effect of the PVC on increasing the ultimate capacity at a given eccentricity was more significant for the walls reinforced with 4-10M than the walls reinforced with 4-15M. For the lowest reinforcement ratio (4-10M), the PVC encased specimens showed an increase in peak load by 37.2% and 17.1% at an eccentricity of 67.73 mm and 101.6 mm, respectively. When the reinforcement was increased to 4-15 M, the increase in the peak load dropped at all eccentricities to 10%. For the vertical and the mid-span deflection, the PVC encased specimens and the control specimens showed the same values. Also, the test results showed an increase in the energy absorption capacity for the PVC encased specimens compared to the controls specimens, where the effect for the walls reinforced with 4-10M was higher than the walls reinforced with 4-15M at a given eccentricity. An analytical model was developed to predict the ultimate load capacity of the specimens taking into consideration the effect of the PVC on the load carrying capacity of the walls. The provision was derived based on the moment magnification factor method in which the effect of secondary stresses associated with the column deformations was taken into consideration. The calculated capacities of the PVC encased specimens showed a conservative error of 5.9% on average.