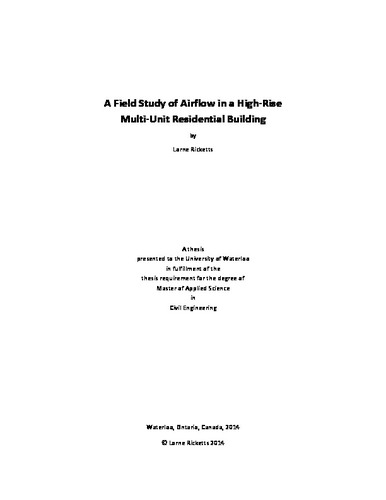 Airflow into, out of, and within buildings is fundamental to their design and operation as it can affect occupant health and comfort, building durability, and energy consumption. This thesis works to develop the understanding of airflow patterns and pressure regimes in high-rise multi-unit residential buildings which are both unique and complex due to the combination of their height, typical inclusion of operable windows, and compartmentalized layout. Specific attention is directed towards the performance of corridor pressurization based ventilation systems which are used pervasively within industry to ventilate and control contaminant transfer in these buildings. Airflow is caused by pressure differences which for buildings are created by the driving forces of wind, stack effect, and mechanical ventilation systems. These airflows are resisted by the air permeance (i.e. airtightness) of building elements including the exterior enclosure and interior compartmentalizing elements. Using an experimental program at a case study building, this thesis assesses the interaction of these driving forces of airflow with the physical building to create the airflow patterns for a typical high-rise multi-unit residential building. Perflourocarbon tracer (PFT) testing was performed to measure in-service airflows into and out of the suites. This testing found that the air change rates of upper suites are significantly higher than that of lower suites and that most suites receive small fractions of modern ventilation rates or are over ventilated. Airflow measurements of the supply of ventilation air to each corridor indicate that these low flow rates are in part due to leakage of air from the supply duct. The PFT testing also found that significant airflow occurred from the parking garage below the building into the occupied building spaces indicating significant potential for transfer of harmful air contaminants. The air permeance of the exterior enclosure and interior compartmentalizing elements were measured using neutralized fan pressurization and depressurization techniques and found to be within typical ranges. In particular this testing found that only 20% of the flow paths out of the corridor were to the adjacent suites through the suite entrance doors and that flows to the elevator shaft and stairwells could create a significant inefficiency in the ventilation system. A long-term monitoring program was implemented at the case study building primarily to monitor exterior environmental conditions including wind and exterior temperature and to correlate these with measured pressure differences. A strong correlation was found between building pressure and exterior temperature. Nearly 70% of the theoretical stack effect pressure was measured to act across the corridor to suite pressure boundary which creates a significant pressure differences to be overcome by the ventilation system, likely contributing to the uneven distribution of ventilation rates. Both wind and stack effect pressures were found to often be of similar or greater magnitude than mechanically induced pressure differences and thus can overwhelm the ventilation system. Overall, the corridor pressurization based ventilation system at the case study building does not effectively or efficiently ventilate the building and also does not provide sufficient control of air contaminants. As the case study building was found to be relatively representative of a typical multi-unit residential building, the findings from this building can be extended to many other buildings. Effective ventilation and airflow control in multi-unit residential buildings likely requires suite compartmentalization and direct supply of ventilation via ducted or in-suite systems.