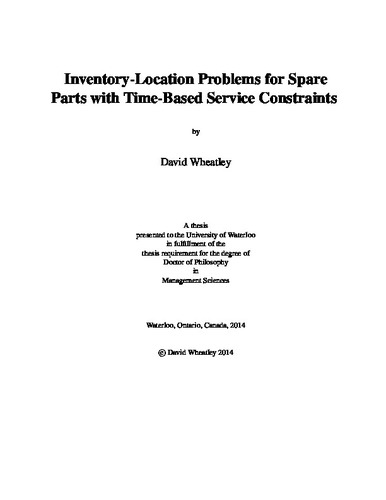 This thesis studies an inventory-location problem faced by a large manufacturer and supplier of small to medium sized aircraft and their spare parts. The sale of after market spare parts is a major source of revenue for the company, but it is a complex industry with many unique challenges. The original problem is a multi-echelon network design problem, which is decomposed into a facility location problem with consolidated shipping challenges, and a spare parts inventory problem. The facility location problem is solved a number of times under different scenarios to give the company's leadership team access to a wide range of feasible solutions. The model itself is an important contribution to industry, allowing the company to solve a spare parts network problem that will guide strategic decision-making for years. The chapter serves as case-study on how to accurately model a large and complicated service parts supply chain through the use of mathematical programming, part aggregation and scenarios. The company used the scenario results to redesign its spare parts distribution network, opening new hubs and consolidating existing service centres. The costs savings associated with this project are estimated to be $4.4 Million USD annually. The proposed solution does increase the burden of customer freight charges on the company's customers compared to the current network, but the operational savings are expected to more than outweigh the increase in customer shipments costs. The project team thus recommended that the company consider subsidizing customer freight costs to offset the expected cost increase the customers face, resulting in lower costs for both the company and their customers. This solution could set a new standard for aircraft spare parts suppliers to follow. Considered next is an integrated inventory-location problem with service requirements based on the first problem. Customer demand is Poisson distributed and the service levels are time-based, leading to highly non-linear, stochastic service constraints and a nonlinear, mixed-integer optimization problem. Unlike previous works in the literature that propose approximations for the nonlinear constraints, this thesis presents an exact solution methodology using logic-based Benders decomposition. The problem is decomposed to separate the location decisions in the master problem from the inventory decisions in the subproblem. A new family of valid cuts is proposed and the algorithm is shown to converge to optimality. This is the first attempt to solve this type of problem exactly. Then, this thesis presents a new restrict-and-decompose scheme to further decompose the Benders master problem by part. The approach is tested on industry instances as well as random instances. The second algorithm is able to solve industry instances with up to 60 parts within two hours of computation time, while the maximum number of parts attempted in the literature is currently five. Finally, this thesis studies a second integrated inventory-location problem under different assumptions. While the previous model uses the backorder assumption for unfilled demand and a strict time window, the third model uses the lost-sales assumption and a soft time window for satisfying time sensitive customer demand. The restrict-and-decompose scheme is applied with little modification, the main difference being the calculation of the Benders cut coefficients. The algorithm is again guaranteed to converge to optimality. The results are compared against previous work under the same assumptions. The results deliver better solutions and certificates of optimality to a large set of test problems.