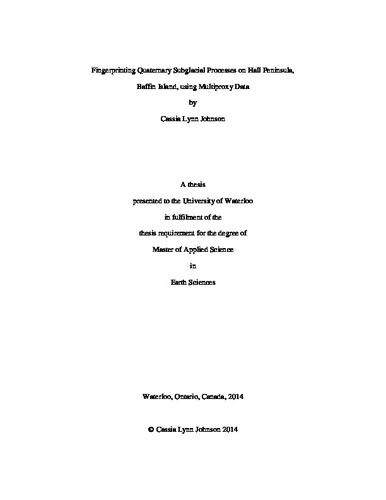 It is important to study subglacial environments in northern Canada for many reasons, such as to develop a more comprehensive understanding of glacial landscape development and to aid in mineral exploration. The purpose of this research is improve understanding of the Quaternary Geology of north central Hall Peninsula, Baffin Island, the subglacial dynamics record in particular, in order to provide industry with new knowledge, maps and interpretations to aid in mineral exploration. The glacial history of north-central Hall Peninsula, Baffin Island is very complex. By studying the subglacial landscape using both remote- and field- based techniques it was possible to develop a subglacial landscape map and a flowset map which highlighted areas with different glacial histories and basal thermal regimes. The subglacial dynamics and how they changed spatially and temporally shaped the landscape to what it is today with a mixture of cold, intermediate, and warm-based ice. Through mapping using remote sensing and field methods, seven glacial landform and striation directions were found and grouped into four ice flow events. The identified ice flows include regional flows, northern and eastern fjord influenced areas, central deglacial flows, and modern icecap flows. Subglacial erosion was investigated using several proxies including streamlined hill elongation ratios, streamlined hill density, and bedrock controlled lake density studies. These proxies together with the subglacial landscape map were overlaid to select discrete zones, termed glacial terrain zones (GTZs), in an attempt to analyze the subglacial dynamics and how different basal thermal regimes interacted with the landscape. Five glacial terrain zones (GTZs) were identified, with different spatio-temporal basal ice regimes and landform assemblages. The first zone (GTZ 1) is characterized by an expansive flowset of parallel paleo-flow indicators trending northeast. This zone has the highest degree of areal scour with thin, discontinuous and relatively unweathered till. The second zone, GTZ 2, is an area where the broad northeast flowset is crosscut locally by ice flow indicators that converge into troughs that now form a series of north trending fjords in the north of the study area. This overprinted landscape is found to propagate inland forming a channelized system, leading way to linear erosion. The modern icecap resides in GTZ 3, which inherited the broad northeast flowset, but is overprinted in valleys by eastern flows funneling into the fjords to the east, as well as western flows flowing from the modern icecap. In the central area, there is a rolling terrain of thicker till (GTZ 4) that is distinguished by its lack of subglacial features. The final contrasting landscape (GTZ 5) is characterized by southeast trending bedrock features (most likely enhanced by southeast flowing ice) and associated perpendicular moraines. GTZ 5 is also characterized by highly weathered bedrock, and locally by landform assemblages recording late deglacial readvances of thin lobes including moraines and striated outcrops. Geochemical studies for each of these landscapes lead to additional insights, characterizing the five zones further. The geochemical studies took advantage of two till sample databases taken over the study area for exploration purposes by Peregrine Diamonds LTD. The chemical index of alteration (CIA) was applied to compare erosion in the different zones. High CIA values indicate high weathering, where low CIA values low weathering. GTZ 1 is characterized by low CIA values (low weathering footprint), and GTZ 5 is characterized by high CIA value (highly weathered). To study if the GTZs had a distinct geochemical signature, as well as a signature landscape, multivariate geochemical statistics (Principal Component Analysis and Linear Discriminant Analysis) were done over the study area. Interestingly, it was found that the GTZs have geochemical signatures, which reflect the role of underlying bedrock, weathering patterns, glacial dispersal, and the complex relationships between subglacial dynamics and landscape evolution. To determine if the GTZs could be predicted by the till geochemistry, linear discriminant analysis was subsequently applied. The results indicate that the till geochemical data has a predictive capacity with an accuracy of 83.78%, which brings insight into the relationship between glacial landscapes and till composition. With this multi-proxy approach and building from previous studies, a conceptual model was developed for the study area. During the Last Glacial Maximum (LGM), the study area was inundated by the Laurentide Ice Sheet (LIS), with the Hall Ice Divide parallel to the axis of the peninsula with ice flowing from the divide to the northeast and southwest. As ice thinned, GTZ 1, an area once inundated with warm-based ice, as shown by evidence of areal scour and low CIA values, switched to being cold-based ice preserving an older landscape. Though GTZ 1 was under cold-based ice, warm-based conditions still prevailed within the channelized flow zones, which characterize GTZ 2. Evidence of this is found in the striation record, as well as the low CIA value indicative of low weathering (or high erosion). This may reflect a transition from LGM (thick-based ice) to thinner, topographically controlled ice, with cold-based ice in interfluves and hilltops, during early deglaciation. The catchment zones of the channelized system locally extend near the central area (GTZ 4) which is reflected in dispersal patterns and the striation record. As the LIS retreated, it went through a series of southeastward readvances and surges (GTZ 5). Though the ice was warm-based near the moraines in GTZ 5, prevailing cold-based conditions prevailed during most of the last glacial cycle, and the late deglacial readvances had limited erosion capacity and did not overprint the cold-based landscape significantly. This is shown by the CIA values indicative of high weathering, and lack of subglacial landforms. Series of pro-glacial lakes also formed in front of the retreating lobe. Ice is needed over GTZ 1 to prevent these lakes from draining northward. This thin ice was most likely cold-based, preserving the older GTZ 1 landscape of areal scouring. The glacial landscape of Hall Peninsula appears to record a switch from uniform warm-based LGM ice, which was laterally extensive, to localized channel flows in the fjords during deglaciation and intervening cold-based ice. The change in the geometry and basal thermo-mechanical conditions may be the prologue to the separation of the modern day ice cap from the LIS.