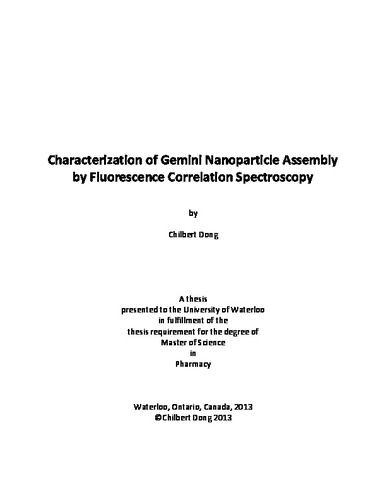 Research in the field of non-viral gene delivery has demonstrated that a deeper understanding of the fundamental processes of nanoparticle assembly is required in order to improve their efficacy. While gemini nanoparticles (gemini NPs) and other non-viral delivery systems have been vigorously characterized using several techniques, our knowledge is still incomplete. The first objective of this study was the development of new methodology using fluorescence correlation spectroscopy (FCS) to investigate the stages of gemini NPs assembly. It was demonstrated that by labeling the plasmid, different stages of gemini NP assembly from the gemini-plasmid pre-complex (GP) to the final gemini nanoparticle (or gemini-plasmid-lipid complex; GPL), could be studied. Based on diffusion coefficients and particle numbers extrapolated from the autocorrelation function (ACF), FCS was able to determine that each phase of assembly had distinct characteristics. The FCS study using 12-3-12 gemini surfactant showed that both the diffusion coefficient and particle number of GPs (0.98±0.31 x 10-12 m2/s) was significantly lower than the final GPL (3.11±0.41 x 10-12 m2/s). Based on the Stokes-Einstein equation the particle size was calculated to be 300-500 nm for GP and 200-300 nm for GPLs. The raw intensity histograms showed that both GPs and GPLs are composed of multiple plasmids. Furthermore the study showed that the final GPLs contain fewer plasmids compared to the intermediate GP. FCS results were validated by using existing characterization methods including dynamic light scattering (DLS), zeta potential and dye exclusion assays. The second objective involved the detailed characterization of gemini NP. Nine different gemini surfactants and two different phospholipids were used in a systematic study to assess the effect of gemini surfactant and lipid structure on the final morphology of gemini NP. The study revealed that gemini surfactant structure had a strong effect on structure of GP intermediates, but addition of phospholipids resulted in the formation of uniform gemini NPs. Based on the results of this study a new model for GP and GPL assembly is proposed based on the formation of supramolecular aggregates of gemini-plasmids, governed by gemini surfactant chemical structure, and dispersed by phospholipids to form GPLs.