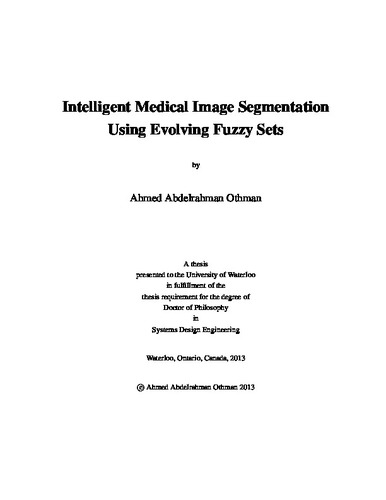 Image segmentation is an important step in the image analysis process. Current image segmentation techniques, however, require that the user tune several parameters in order to obtain maximum segmentation accuracy, a computationally inefficient approach, especially when a large number of images must be processed sequentially in real time. Another major challenge, particularly with medical image analysis, is the discrepancy between objective measures for assessing and guiding the segmentation process, on the one hand, and the subjective perception of the end users (e.g., clinicians), on the other. Hence, the setting and adjustment of parameters for medical image segmentation should be performed in a manner that incorporates user feedback. Despite the substantial number of techniques proposed in recent years, accurate segmentation of digital images remains a challenging task for automated computer algorithms. Approaches based on machine learning hold particular promise in this regard because, in many applications, including medical image analysis, frequent user intervention can be assumed as a means of correcting the results, thereby generating valuable feedback for algorithmic learning. This thesis presents an investigation of the use of evolving fuzzy systems for designing a method that overcomes the problems associated with medical image segmentation. An evolving fuzzy system can be trained using a set of invariant features, along with their optimum parameters, which act as a target for the system. Evolving fuzzy systems are also capable of adjusting parameters based on online updates of their rule base. This thesis proposes three different approaches that employ an evolving fuzzy system for the continual adjustment of the parameters of any medical image segmentation technique. The first proposed approach is based on evolving fuzzy image segmentation (EFIS). EFIS can adjust the parameters of existing segmentation methods and switch between them or fuse their results. The evolving rules have been applied for breast ultrasound images, with EFIS being used to adjust the parameters of three segmentation methods: global thresholding, region growing, and statistical region merging. The results for ten independent experiments for each of the three methods show average increases in accuracy of 5\%, 12\% and 9\% respectively. A comparison of the EFIS results with those obtained using five other thresholding methods revealed improvements. On the other hand, EFIS has some weak points, such as some fixed parameters and an inefficient feature calculation process. The second approach proposed as a means of overcoming the problems with EFIS is a new version of EFIS, called self-configuring EFIS (SC-EFIS). SC-EFIS uses the available data to estimate all of the parameters that are fixed in EFIS and has a feature selection process that selects suitable features based on current data. SC-EFIS was evaluated using the same three methods as for EFIS. The results show that SC-EFIS is competitive with EFIS but provides a higher level of automation. In the third approach, SC-EFIS is used to dynamically adjust more than one parameter, for example, three parameters of the normalized cut (N-cut) segmentation technique. This method, called multi-parametric SC-EFIS (MSC-EFIS), was applied to magnetic resonance images (MRIs) of the bladder and to breast ultrasound images. The results show the ability of MSC-EFIS to adjust multiple parameters. For ten independent experiments for each of the bladder and the breast images, this approach produced average accuracies that are 8\% and 16\% higher respectively, compared with their default values. The experimental results indicate that the proposed algorithms show significant promise in enhancing image segmentation, especially for medical applications.