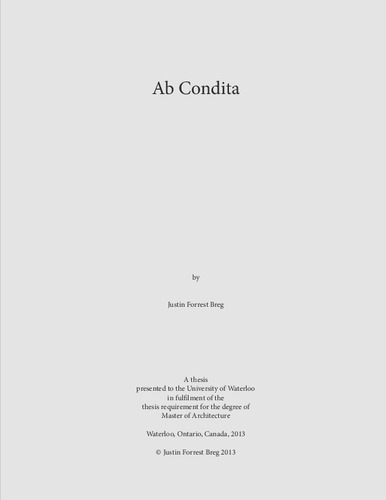 Time and structure; expectation and construction; landscape and architecture; history and myth. The foundation is a joint which carries extraordinary potential to speak of the cultures that built it. This text tells stories about three cultures whose identities are interwoven with their foundation-building. Tracing a path among the distinct ways in which they found, it values the foundation as a marker between anticipating and making in the architectural process; an ambiguous joint between land and building; an invisible structure of the surfaces we touch; and an indicator of an attitude towards time. The narrative begins in Rome and concludes in the James Bay Lowlands of Northern Canada. Both indigenous cultures represent extremes in notions of ‘foundation’: Rome’s tufa block substructures have borne buildings stratified over millennia; while the subarctic Omushkego Cree have traditionally had no permanent foundations, their building traces perceived in subtle differences of soil composition. A third base in the Netherlands is both a fulcrum and foil, as the nation’s diverse local and large-scale strategies negotiate heavy and light building traditions, and offer another distinct set of considerations in preparing ground. The aim of this book is two-fold. Firstly, it is to restore the foundation to the purview of the architect. Groundwork is more than a technical puzzle: it is also a deeply imaginative act. Secondly, this text seeks to understand why cultures found the way they do, and to give consideration to the unique inheritances offered by diverse foundation-building traditions.