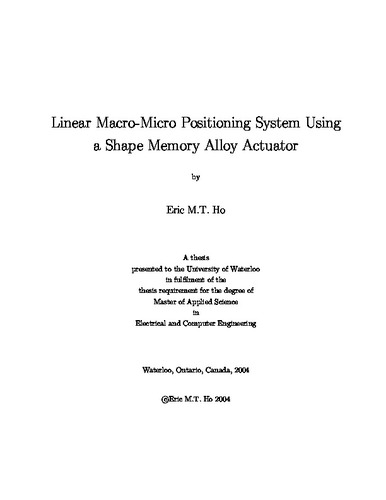 The use of high-precision automated equipment is steadily increasing due in part to the progressively smaller sizes of electronic circuits. Currently, piezoelectric transducers (piezos) dominate as the actuation device for high precision machines, but shape memory alloys (SMA) may be a viable alternative to reduce monetary costs. This work explores the implementation of a low-cost linear macro-micro positioning system. The system consists of a modified printer carriage to provide long range, macro scale linear motion (approximately 200 mm range and 200 µm precision) and a micro scale system (approximately 4 mm range and 5 µm target precision) that uses an SMA actuator. A detailed description of the design and implementation of the system is given in this research. A model of the macro-stage is then generated by first identifying and inverting a simple friction model to linearize the system, thereby allowing for modified least squares (MLS) identification of a linear model. Various controllers are attempted for the macro-stage and compared with an experimentally tuned nonlinear PD controller that is implemented in the final design. A model of the micro-stage is derived through analysis of the SMA actuator. The model for the actuator is separated into two portions, an electro-thermal model, and a hysteresis model. The hysteresis model is derived using the Preisach model, and the electro-thermal model through MLS identification. To control the micro-stage, a PI controller with antiwindup is developed experimentally. The two stages are then executed together in closed loop and the resulting coupling between the two stages is briefly examined. Experimental data used for the modelling and design is presented, along with results of the final macro-micro linear positioning system.