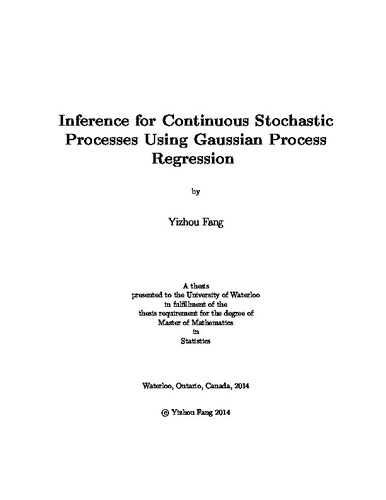 Gaussian process regression (GPR) is a long-standing technique for statistical interpolation between observed data points. Having originally been applied to spatial analysis in the 1950s, GPR offers highly nonlinear predictions with uncertainty adjusting to the degree of extrapolation -- at the expense of very few model parameters to be fit. Thus GPR has gained considerable popularity in statistical applications such as machine learning and nonparametric density estimation. In this thesis, we explore the potential for GPR to improve the efficiency of parametric inference for continuous-time stochastic processes. For almost all such processes, the likelihood function based on discrete observations cannot be written in closed-form. However, it can be very well approximated if the inter-observation time is small. Therefore, a popular strategy for parametric inference is to introduce missing data between actual observations. In a Bayesian context, samples from the posterior distribution of the parameters and missing data are then typically obtained using Markov chain Monte Carlo (MCMC) methods, which can be computationally very expensive. Here, we consider the possibility of using GPR to impute the marginal distribution of the missing data directly. These imputations could then be leveraged to produce independent draws from the joint posterior by Importance Sampling, for a significant gain in computational efficiency. In order to illustrate the methodology, three continuous processes are examined. The first one is based on a neural excitation model with a non-standard periodic component. The second and third are popular financial models often used for option pricing. While preliminary inferential results are quite promising, we point out several improvements to the methodology which remain to be explored.