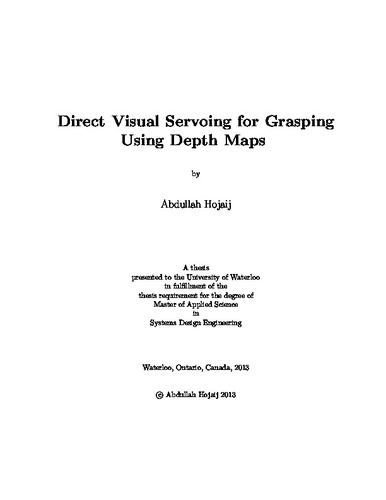 Visual servoing is extremely helpful for many applications such as tracking objects, controlling the position of end-effectors, grasping and many others. It has been helpful in industrial sites, academic projects and research. Visual servoing is a very challenging task in robotics and research has been done in order to address and improve the methods used for servoing and the grasping application in particular. Our goal is to use visual servoing to control the end-effector of a robotic arm bringing it to a grasping position for the object of interest. Gaining knowledge about depth was always a major challenge for visual servoing, yet necessary. Depth knowledge was either assumed to be available from a 3D model or was estimated using stereo vision or other methods. This process is computationally expensive and the results might be inaccurate because of its sensitivity to environmental conditions. Depth map usage has been recently more commonly used by researchers as it is an easy, fast and cheap way to capture depth information. This solved the problems faced estimating the 3-D information needed but the developed algorithms were only successful starting from small initial errors. An effective position controller capable of reaching the target location starting from large initial errors is needed. The thesis presented here uses Kinect depth maps to directly control a robotic arm to reach a determined grasping location specified by a target image. The algorithm consists of a 2-phase controller; the first phase is a feature based approach that provides a coarse alignment with the target image resulting in relatively small errors. The second phase is a depth map error minimization based control. The second-phase controller minimizes the difference in depth maps between the current and target images. This controller allows the system to achieve minimal steady state errors in translation and rotation starting from a relatively small initial error. To test the system's effectiveness, several experiments were conducted. The experimental setup consists of the Barrett WAM robotic arm with a Microsoft Kinect camera mounted on it in an eye-in-hand configuration. A defined goal scene taken from the grasping position is inputted to the system whose controller drives it to the target position starting from any initial condition. Our system outperforms previous work which tackled this subject. It functions successfully even with large initial errors. This successful operation is achieved by preceding the main control algorithm with a coarse image alignment achieved via a feature based control. Automating the system further by automatically detecting the best grasping position and making that location the robot's target would be a logical extension to improve and complete this work.