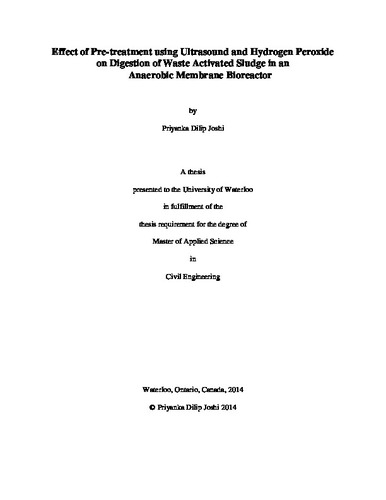 The rate of anaerobic digestion (AD) often depends on the rate-limiting hydrolysis step that makes organics available to microorganisms. To achieve efficient conversion of particulates to soluble materials and finally methane, the biomass in the digester must be provided with optimal operational conditions that will allow for biomass retention and substrate metabolism. Two approaches were employed in this study to improve the ultimate biodegradability of waste activated sludge (WAS) - Pre-treatment (PT) and operation using an Anaerobic Membrane Bioreactor (AnMBR). PT of WAS is one way of speeding up hydrolysis. It has been proposed that PT leads to the lysis of cells, which in turn causes the release and solubilisation, and thus availability of intracellular matter to microorganisms for microbial growth and metabolic activities. This study compared the effect of thermal, sonication, and sonication + hydrogen peroxide PT on chemical oxygen demand (COD) solubilisation of WAS. Based on the soluble COD (SCOD) release, it was concluded that combined chemi-sonic treatment resulted in better WAS degradation rather than individual ultrasonic pre-treatment and thermal PT. The highest solubilisation rate was observed at a chemi-sonic PT of 50gH2O2/kgTS and sonication duration of 60 minutes. At this PT, a COD solubilisation of 40% was observed which was significantly different than PT involving only sonication and no pre-treatment (0.88%) at 95% confidence. Therefore a peroxide-sonic PT was chosen to treat WAS in this study as it was expected to result in the greatest improvement in WAS biodegradability. In addition to PT, biodegradability of WAS can also be improved by coupling PT with an AnMBR. AnMBRs prevent biomass washout by decoupling the solids retention time (SRT) from the hydraulic retention time (HRT). Thus, a long SRT can be used to provide sufficient duration for biological activities without increasing the volume of the reactor. In this study, a 4.5L AnMBR with an HRT and SRT of 3 and 20 days, respectively was used to treat raw and PT WAS. In order to compare the biodegradability of PT and raw WAS, the AnMBR was operated in three phases. Phase 1 was operated with raw WAS, Phase 2 was operated with WAS pre-treated with 50 gH2O2/kgTS and 20 minutes ultrasound (US), and Phase 3 was operated with WAS pre-treated with 50 gH2O2/kgTS and 60 minutes US. The anaerobic biodegradability of WAS following a combination of ultrasonic pre-treatment and H2O2 addition was significantly improved, with Phase 3 resulting in the greatest improvement. The COD destruction for phases 1, 2, and 3 were 49%, 58%, and 63%, respectively whereas the volatile suspended solids (VSS) destruction for phases 1, 2, and 3 were 46%, 71%, and 77% respectively. Organic Nitrogen (Org-N) destruction increased from 44% to 52% for phases 1 and 2 respectively. A further increase of 18% in Org-N destruction was observed in phase 3. This improvement in biodegradability of WAS was attributed to the high solubilisations of COD, VSS, and ON and conversion of non-biodegradable materials to biodegradable fractions. In order to determine the effect of PT of WAS on membrane performance, the transmembrane pressure (TMP) and fouling rate were monitored throughout the operation of the AnMBR. Negligible variation in membrane performance was observed over all three phases. At a constant low flux of 2.75 litres/m2/hour (LMH), the TMP and the fouling rate remained low over the course of operation. In order to maintain the performance of the membrane, maintenance cleaning with 50 ml of 2g/L critic acid solution followed by 50 ml of 0.2 g/L sodium hypochlorite was performed three times a week. In addition, a gas sparing rate of 2 L/minute and a permeation cycle of 10 minutes with 8 minutes of operation followed by 2 minutes of relaxation was employed. During phase 2 of this study, a new membrane was installed due to a faulty gas sparging pump. A slight decrease of TMP was observed with the installation of the new membrane; however the decrease was minimal. In addition critical flux for phases 2 and 3 were determined to be in the range of 6 to 12 LMH. In conclusion, the incorporation of H2O2-US PT with AD could allow treatment plants to substantially reduce the mass flow of solids and organics and thus result in a decrease in requirements for downstream sludge processing. With sufficient maintenance, steady operation could be achieved for a hollow fibre AnMBR with a total solids concentration range of 20-25 g/L, an HRT of 3 days, and an SRT of 20 days. It was found that PT could be successfully integrated with AnMBR to substantially reduce the HRT required for digestion when compared to conventional designs.