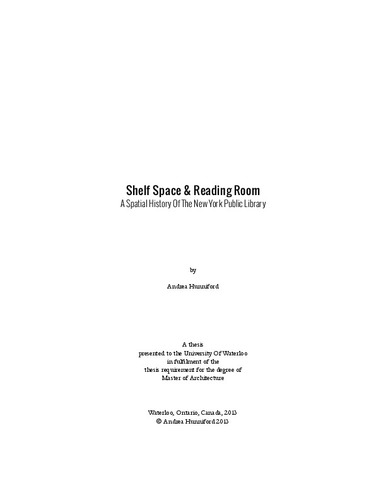 The New York Public Library's Central Building, constructed just over a century ago, is in the midst of a major renovation. The Library's trustees have asked the architects at Foster + Partners to imagine the space currently occupied by the research collections' closed book stacks as a new, publicly accessible, circulating library. The administration's public relations strategy glosses over the meaning of this architectural reinterpretation, selling the renovation plan with only carefully selected historical facts and opinions that show support for the project. However, this narrative is deceiving; it oversimplifies the issues at stake. Both the broader New York Public Library system and Central Library in particular have an incredibly complex history. The influences that shaped the decision to build the 42nd Street building, its design and construction, and subsequent adaptations over the past century demonstrate an important relationship between the objectives of the institution and the Central Library's architectural form. Therefore, beneath the rhetoric of the renovation, beyond the positive inclusion of a main circulating branch in the central building, lies the decision to remove a large portion of the circulating collection from the center of the stronghold built to house it. This decision undermines the unique structure of the New York Public Library as one of the world's premier research institutions, removing the heart of the building.