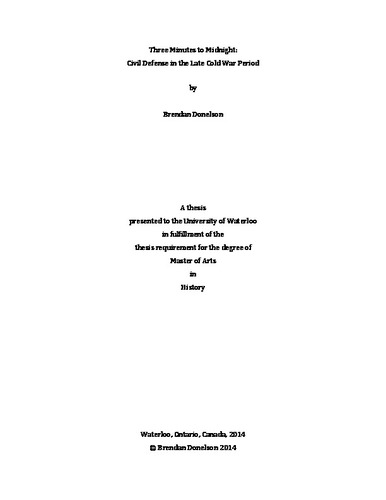 This thesis examines civil defense in the United States under the Nixon, Carter and Reagan administrations. Throughout the late Cold War period civil defense policy planners employed a philosophy of dual-use. The Defense Civil Preparedness Agency (DCPA) and the Federal Emergency Management Agency (FEMA) instructed the American public to plan for a nuclear attack as well as natural disasters. Civil defense directors implemented crisis relocation plans for Americans that lived in designated high-risk areas. In an imminent nuclear attack, Americans in high-risk areas would temporarily relocate to host communities in low-risk areas of the county. This study is a blend of both civil defense policy and the reactions to nuclear war through the prism of popular culture in the late Cold War period.