Thermal and Hydrological Response of Rock Glaciers to Climate Change: A Scenario Based Simulation Study 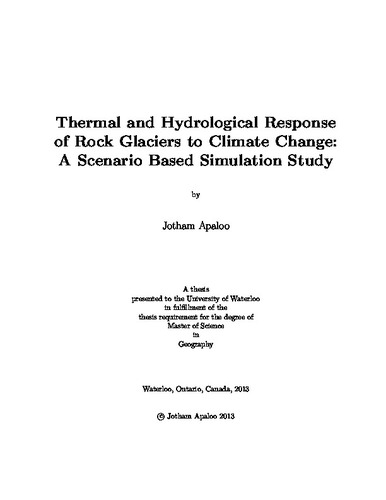 Snow and glaciers are considered the most important sources of the estimated 32-60% of global water resources which are provided by mountains. Consequently, snow and glaciers have regularly been the focus of climate change studies in mountain regions. Rock glaciers are a type of ice-debris landform characterized by creeping ice-rich permafrost. Recognition of the hydrological significance of rock glaciers is increasing and is of particular relevance to the Arid Andes, where rock glaciers cover greater area than glaciers by an order of magnitude. Little research exists on the hydrological significance of rock glaciers beyond potential water storage capacities and their runoff pathways. Additional knowledge and research approaches pertaining to the seasonal hydrological contributions and climatic sensitivities of rock glaciers are necessary for improved water resource planning in many regions around the world. This work explored the feasibility of utilizing the energy and water balance model GEOtop to quantify the thermal and hydrological dynamics of rock glaciers under several climate scenarios. Weather data was generated with the intermediate-stochastic weather generator AWE-GEN for a site in the Southeast Swiss Alps, which marked a novel approach in studies of rock glaciers. Weather data for a reference (REF) scenario was generated which approximates conditions during the observation period (1985 to 2012). AWE-GEN produced time series of weather data for the REF scenario with statistical properties of precipitation in close agreement with observations. Air temperature had substantial inaccuracies with mean annual air temperature (MAAT) cooler by 1.82 C due to negative temperature biases in summer months which are attributed to difficulties in estimating parameters of the weather generator model caused by local climatic factors. The influence of climate change was also examined. Data for 8 climate change scenarios were generated by specifying change factors for mean monthly air temperature. MAAT in the climate change scenarios was within +/-0.12 C of the speci ed change factor from MAAT in the REF scenario. The thermal and hydrological evolution of rock glacier soils were simulated for 50 years under the climatic forcing of the REF scenario followed by 50 years under each climate change scenario. Mean annual ground surface temperature (MAGST), active layer depth (Dal), permafrost total ice content (IWEtot), and the potential summer runoff contribution (MELTsum) were quanti ed and compared before and after the onset of the climate change conditions. Air temperature increases in the climate change scenarios were amplified in MAGST. Stable rock glacier points were resistant to changes in Dal and IWEtot under any annual, summer, and winter mean air temperature increase of 1 C, and summer and winter mean air temperature increases of 3 C despite notable changes in MAGST and MELTsum. Under warming scenarios, the greatest increase in MELTsum occurred for high elevation rock glacier points with the mean possible runoff contribution increasing 88% under 3 C of warming, which corroborates with increased runoff from high elevation permafrost in the Colorado Rockies in recent decades.