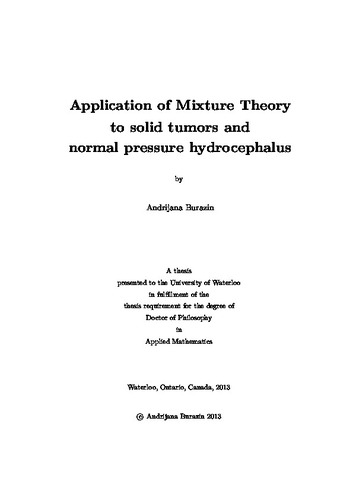 In this thesis, the theory of poroelasticity, namely the Mixture Theory version -- a homogenized, macroscopic scale approach used to describe fluid flow through a porous medium -- is employed in three separate cases pertaining to a biological phenomenon. The first investigation explores the behavior of interstitial fluid pressure (IFP) in solid tumors. Thus, in Chapter 2, a Mixture Theory based approach is developed to describe the evolution of the IFP from that in a healthy interstitium to the elevated levels in cancerous tumors. Attention is focused on angiogenesis, a tightly regulated process in healthy tissue that provides all necessary nutrients through the creation of new blood vessels. Once this process becomes unruly within a tumor, angiogenesis gives rise to an abnormal vasculature by forming convoluted and leaky blood vessels. Thus, the primary focus of the model is on the capillary filtration coefficient and vascular density as they increase in time, which in turn elevates the tumor IFP. Later, the Mixture Theory model is extended to simulate the effects of vascular normalization, where the cancer therapy not only prunes blood vessels, but reverts the chaotic vasculature to a somewhat normal state, thereby temporarily lowering the tumor IFP. In Chapter 3, the validity of an assumption that was made in order to facilitate the mathematical calculations is investigated. In addition to all of the Mixture Theory assumptions, it is assumed that the pore pressure p is proportional to the tissue dilatation e. This assumption is examined to determine how appropriate and accurate it is, by using a heat type equation without the presence of sources and sinks under the assumption of a spherical geometry. The results obtained under the proportionality of p and e, are compared with the results obtained without this assumption. A substantial difference is found, which suggests that great care must be exercised in assuming the proportionality of p and e. The last application is reported in Chapter 4 and it investigates the pathogenesis of normal pressure hydrocephalus. In a normal brain, cerebrospinal fluid (CSF) is created by the choroid plexus, circulates around the brain and the spinal cord without any impediment, and then is absorbed at various sites. However, normal pressure hydrocephalus occurs when there is an imbalance between the production and absorption of CSF in the brain that causes the impaired clearance of CSF and the enlargement of ventricles; however, the ventricular pressure in this case is frequently measured to be normal. Thus, a mathematical model using Mixture Theory is formulated to analyze a possible explanation of this brain condition. Levine (1999) proposed the hypothesis that CSF seeps from the ventricular space into the brain parenchyma and is efficiently absorbed in the bloodstream. To test this hypothesis, Levine used the consolidation theory version of poroelasticity theory, with the addition of Starling's law to account for the absorption of CSF in the brain parenchyma at steady state. However, the Mixture Theory model does not agree with the results obtained by Levine (1999) which leads one to conclude that the pathogenesis of normal pressure hydrocephalus remains unknown. To conclude the thesis, all three applications of Mixture Theory are discussed and the importance and contribution of this work is highlighted. In addition, possible future directions are indicated based on the findings of this thesis.