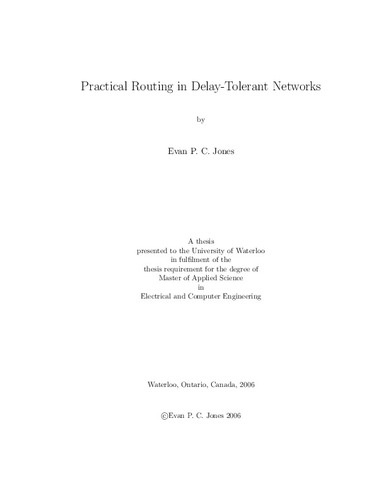 Delay-tolerant networks (DTNs) have the potential to connect devices and areas of the world that are under-served by traditional networks. The idea is that an end-to-end connection may never be present. To make communication possible, intermediate nodes take custody of the data being transferred and forward it as the opportunity arises. Both links and nodes may be inherently unreliable and disconnections may be long-lived. A critical challenge for DTNs is determining routes through the network without ever having an end-to-end connection. <br /><br /> This thesis presents a practical routing protocol that uses only observed information about the network. Previous approaches either require complete future knowledge about the connection schedules, or use many copies of each message. Instead, our protocol uses a metric that estimates the average waiting time for each potential next hop. This learned topology information is distributed using a link-state routing protocol, where the link-state packets are flooded using epidemic routing. The routing is recomputed each time connections are established, allowing messages to take advantage of unpredictable contacts. Messages are exchanged if the topology suggests that a connected node is "closer" than the current node. <br /><br /> Simulation results are presented, showing that the protocol provides performance similar to that of schemes that have global knowledge of the network topology, yet without requiring that knowledge. Further, it requires a significantly less resources than the epidemic alternative, suggesting that this approach scales better with the number of messages in the network.