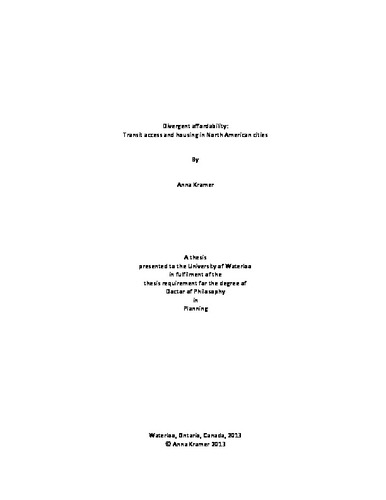 During the process of post-war Fordist suburban expansion, the American and Canadian city was expanded and built around the automobile as the dominant mode of transportation. This caused an inversion of the pattern of centrality and access in cities, and auto-accessible suburbs became the place of wealth and privilege, away from the city centre. There is reason to believe that these patterns are changing in this century. A re-investment in downtowns along with a loss of middle-class manufacturing jobs and income is resulting in changing suburban socioeconomic geographies. If auto-oriented suburbs are becoming the new location of affordability and decline, this would result in an unprecedented situation: car-dependent social peripheralization. This dissertation tests this possibility. Using statistics and spatial analysis, it presents public data on socioeconomics, urban form and public transit to try and understand the current geographies of housing affordability in relation to transit access in twenty large metropolitan regions. This research is concerned with how the spatial polarization of housing affordability to suburban areas impacts access to public transit for lower-income households. In a comparative survey of twenty North American cities, I demonstrate that the lowest-cost home ownership is often found outside of the zone served by frequent transit networks, while the lowest-cost rental housing is fragmented across both transit networks and outside them. Half of the cities studied did not have enough frequent transit lines to offer an accessible network at all. The results show that in cities with transit systems that offer metropolitan-scale access, there is commonly a misalignment between affordable home ownership opportunities and frequent transit networks. When incomes and other socioeconomic and built-in environment variables are taken into account, the cost of owner-occupied housing is higher in transit-accessible areas. This is problematic from the perspectives of social justice and economic efficiency: cities will not offer fair access to opportunity if large segments of the population are priced out. The issue of isolated suburbanisms calls for adding social utility to the criteria for transit extension, as well as for innovative land use policy to encourage affordable transit-oriented intensification in these areas. While this analysis offers a snapshot of current conditions, further quantitative and qualitative research would add to our understanding of these issues. This research suggests, at a comparative metropolitan scale in the North American context, that affordable home ownership is now often connected to automobile dependency and separated from access to alternative, less expensive mobilities. This lack of affordable access is a concern for social and environmental justice, for economic mobility and for personal and community agency.