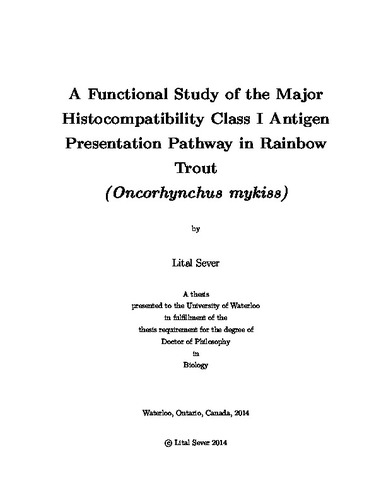 Major Histocompatibility Complex (MHC) class I receptors are glycoproteins which play a critical role in anti-viral immunity by displaying foreign peptides to cytotoxic T cell lymphocytes. The loading of high affinity peptides into the MHC class I receptor in mammals is coordinated by a multiple proteins that are collectively referred to as the peptide loading complex (PLC). To date, the composition of the peptide loading complex in fish is unknown and therefore the characterization of the molecules which may exist in this putative complex was pursued. This thesis includes the cloning and functional characterization of ERp57 and calnexin in rainbow trout which, in mammals, are known to interact with the MHC class I receptor either during its early biogenesis or later in the assembly of the PLC. Trout ERp57 and calnexin cDNA sequences are ubiquitously expressed in trout tissues and both the ERp57 and calnexin genes appear in at least two copies each in the trout genome. Interestingly, despite their high sequence identity with their mammalian homologues, some structural discrepancies were identified. ERp57 does not contain an endoplasmic reticulum (ER) retention signal or a nuclear localization signal, while one of the two isolated cDNA clones for calnexin does not contain an ER (endoplasmic reticulum) retention signal and lacks a conserved C-terminal serine phosphorylation site. These findings suggest that in trout, there may be unique versions of these proteins that have acquired different cellular functions. Through the production of polyclonal antibodies against trout ERp57, the conserved protein induction of ERp57 during ER stress was demonstrated concurrently with calnexin. In addition, this study shows for the first time that ERp57 can be induced transcriptionally by phytohemagglutinin and synthetic double stranded RNA, which implies its possible regulatory role during viral infection and the activation of the immune response. Furthermore, the functional characterization of the MHC class I specific chaperone tapasin, a key element in the PLC of mammals was pursued. Tissue and cell line distribution revealed that tapasin is expressed in high levels in immune system organs and in the rainbow trout macrophage cell line RTS11, at a relative molecular weight of 48 kDa with an additional 20 kDa band detected by the tapasin antibody. Tapasin protein was significantly up regulated upon exposure to synthetic double stranded RNA and during infection with two fish viruses: chum salmon virus and viral hemorrhagic septicemia virus genotype IVa, whereas the expression of the 20 kDa band was not affected by these stimuli. This study also examined the regulation of the MH class I heavy chain,β2 microglobulin and their associated machinery upon exposure to viral hemorrhagic septicemia virus genotype IVa at permissive and non-permissive temperatures. β2 microglobulin secretion into the cell media, a marker of MH class I receptor turnover, was detected in the conditioned media of RTS11 cells under normal conditions and was shown to be significantly enhanced during viral hemorrhagic septicemia virus genotype IVa infection. Furthermore, when RTS11 cells were maintained at cold temperatures, the secretion of β2 microglobulin was significantly reduced in both infected and non-infected cultures, while the cellular levels of β2 microglobulin remained unchanged. These results suggest that cold temperature can alter the expression of the MH class I molecule on the cell surface and therefore may be contributing to host susceptibility to viral hemorrhagic septicemia virus genotype IVa during the winter. Lastly, Co-immunoprecipitation demonstrated the interaction of the lectin chaperones: calnexin and calreticulin with the glycosylated MH class I receptor supporting their conserved role during MH class I receptor folding in fish. Concurrently, tapasin's interaction with transporter associated with antigen processing (TAP) and with the glycosylated form of the MH class I was revealed for the first time in fish, which supports their role in antigen presentation as in mammals. This study demonstrated that ERp57 and tapasin form a conserved disulfide linked heterodimer of 110 kDa, however unlike mammals, an additional 75 kDa heterodimer was detected which suggests a possible novel interaction of ERp57 with a 20 kDa tapasin version alternately regulating antigen presentation in fish. Overall, this study suggest that the interactions involved in antigen presentation in mammals are conserved in fish, however the presence of different protein versions of calnexin, ERp57 and tapasin might dictate a different mode of regulation for MH class I assembly in fish, as opposed to mammals. Elucidating these interactions during various viral infections in fish can help to uncover possible viral strategies to manipulate the host immune response and will provide information needed to assist in designing novel tools to prevent fish viral diseases.