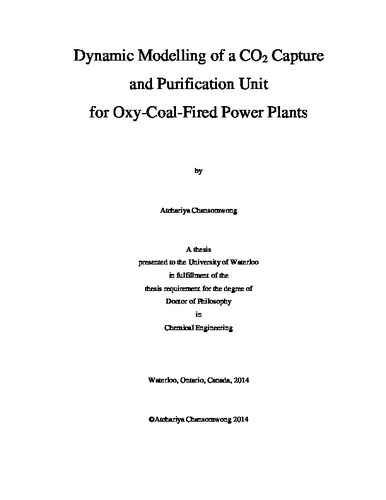 Even though the use of renewable energy in electricity generation has significantly increased over time, coal is projected to remain as the primary fuel in electricity generation worldwide in the next decades due to its availability, stability of supply and cost. However, coal-fired power plants are the largest stationary sources of CO2 emissions that contribute to global warming. Several technologies have been developed to mitigate CO2 emissions from coal-fired power plants. Oxy-combustion is a promising pathway to capture CO2 from coal fired power plants that competes favourably with other CO2 capture technology pathways such as post-combustion and pre-combustion. Oxy-combustion has attracted attention because it provides a CO2-enriched flue gas stream which can be further purified using a relatively simple multi-stage compression and cooling processes. Currently, there is no oxy-coal-fired power plant in commercial-scale operation. Thus, the transition towards commercial scale operation is the main challenge for this technology. The CO2 capture and purification unit (CO2CPU) is an important unit in oxy-coal-fired power plants that determine the quality of the CO2 product and energy consumption of the power plants. Several studies published on the CO2CPU process have evaluated the performance of this system at steady state. Insight regarding the dynamic behaviour of the CO2CPU process is very limited and a mechanistic dynamic model of the CO2CPU is not available in open literature. Thus, research on dynamic modelling and control system development is still required to demonstrate the operability and controllability of this technology. This study aims to develop, test and validate a dynamic model of the CO2CPU for oxy-coal-fired power plants. Detailed mathematical models of each unit operation in the CO2CPU are provided in this study. The main challenge was to develop a dynamic model of a multi-stream heat exchanger that involves multiple process streams and encounters both condensing and boiling two phase flows. A dynamic model that is not computationally intensive, to slow down the entire CO2CPU plant model, and that can predict reasonable fluid temperatures in the multi-stream heat exchanger was developed in this study. The proposed multi-stream heat exchanger model was based on a shell and tube configuration that considers only axial changes in flow, i.e., a 1D model. Likewise, the two phase region in this unit was modelled using a homogenous model, which is a simplified discretized two-phase flow model that reduces the computational effort and complexity of the multi-stream heat exchanger process model. The homogenous model takes into account the changes in the fluid properties in the two phase region to calculate the heat transfer coefficients of the multi-stream heat exchanger models. To the author’s knowledge, the model presented in this study represents the first mechanistic process model that describes the transient behaviour of a CO2CPU for oxy-fired power plant. Two design configurations of the CO2CPU were considered in this study, i.e. the Air Products’ CO2CPU and the CanmetENERGY’s proprietary CO2CPU (CanCO2). Both plants are designed based on a two-stage flash separation process. The CanCO2 is an extended design of the Air Products’ CO2CPU. The presence of an external recycle stream , recycling a portion of the CO2 rich effluent gas stream from the first flash drum to the compressor train, in the CanCO2 is a major distinction between the two CO2CPU configurations and enhances the CO2 capture rate for the CanCO2 process. Nevertheless, the addition of this recycle stream makes the CanCO2 plant model convergence more challenging than the Air Products’ CO2CPU since it adds natural feedback into the system. A systematic procedure to perform the process integration of all the unit operations considered in the CO2CPU flowsheets was developed and presented in this study. Stand-alone unit operation models were developed, coded and then connected together one at a time. Dynamic models of the Air Products’ CO2CPU and the CanCO2 were developed and validated at steady state using design data. Reasonable agreement between the developed models and the design data were obtained for both CO2CPU configurations. Several dynamic tests were performed to gain insight into the transient behaviour of the CO2CPU. The results obtained from the transient analyses clearly demonstrate that both CO2CPU plants are highly nonlinear processes. The CO2 recovery and the CO2 product purity obtained from the base case of both plants are similar, approximately at 89 wt% and 95 mol% respectively. The operating conditions of the first flash drum were found to play a key role on the CO2CPU performance of both plants. In addition, both models indicate that the CO2 recovery is more sensitive to the operating conditions than that of the CO2 product purity. The CO2 purity is more sensitive to the flue gas composition and responds to all changes performed in this study faster than the CO2 recovery. Because of the recycle stream, the CanCO2 response to all changes is slower than the Air Products’ CO2CPU. Nevertheless, the use of a recycle stream improves the CO2 recovery and increases the number of manipulated variables in the CanCO2, thus this system has more alternative control structures than the Air Products’ CO2CPU. The models developed in this study can be extended to include the controllability analysis and the control structure design for the CO2CPU; and the integration of oxy-boiler, steam cycle and also air separation unit (ASU) into a complete dynamic model of the oxy-fired power plant that will be very useful for oxyfuel combustion technology scale-up.