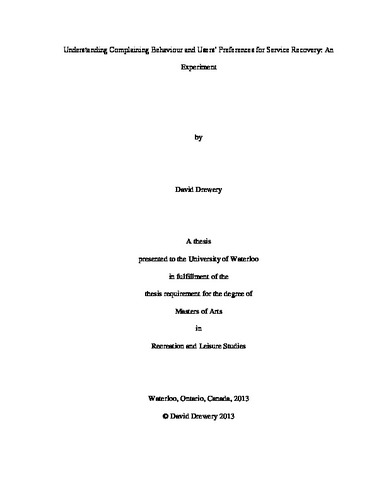 Many services fail. Failures are those encounters during which the user assesses the service as flawed (Maxham & Netemeyer, 2003; Palmer, Beggs, & Keown-McMullan, 2000), or improper (Maxham, 2001). An emergent service failure literature has determined that such failures play an important role in user perceptions and subsequent behaviours. The present study sought to discover the ways in which possible users responded to an ambiguous service failure. The purpose of the study was to twofold: (a) to understand the situational, emotional, and dispositional factors which influence users’ likelihood of complaining behaviours; (b) to develop connections between these factors and users’ preferences for service recovery. We were guided by several research questions including: RQ1: When the cause of the failure is ambiguous, to what/whom do users attribute blame? RQ2: How well do attribution of blame and perceived failure severity predict negative emotions? RQ3: What is the relative influence of each negative emotion in predicting the likelihood of each complaining behavior? RQ4: Does user disposition intervene in the relationship between emotion and complaining? RQ5: What is the role of appraisals and emotion in determining service recovery preferences? Borrowing from the service quality, consumer behaviour, health, and therapy literatures, we develop a conceptual framework for answering our questions. Consistent with recent research, we conceptualized that negative emotions following service failures were dependent on users’ appraisals of the situation. Specifically, we looked at the effects of failure severity and attribution of blame on anger, frustration, shame, guilt, regret, and dissatisfaction. We then conceptualized complaining behaviour as a coping mechanism for these negative emotions, and preferences for service recovery as manifestations of immediate desires users would have to address their emotions. To test our theory, an experiment with hypothetical scenarios and a survey instrument was developed. We manipulated two conditions (time lost and money lost) at different points in the survey while participants while self-selected into an attribution of blame condition (Self, provider, other). Undergraduate students at the University of Waterloo (n=288) served as the sample. The questionnaire assessed such variables as attitudes towards complaining, locus of control, tendency for avoidance, emotional response, complaining behaviours, and preferences for service recovery. Results from multivariate analyses confirmed that appraisals help predict negative emotions, and that negative emotions influence complaining behaviours. Results also demonstrated that appraisals and emotions do begin to explain variance in service recovery preferences. Contrary to the interactionist approach, results failed to support the notion that personal dispositions (such as attitudes and personality traits) moderate the relationship between situational factors and behaviour. Finally, conclusions for the study are made, and implications for future research and the design of service recovery strategies are discussed.