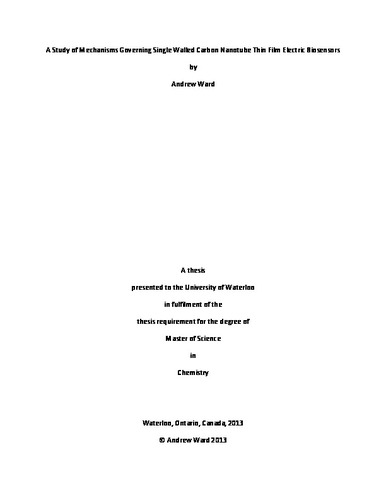 The successful fabrication and characterization of two chemiresistive platforms for biomolecule detection was demonstrated by this work. The Si/Silica based single walled nanotube thin film (SWNTTF) platform was developed to understand the effect of device geometry on pH and M13 bacteriophage sensing capabilities as well as the underlying mechanisms governing SWNTTF chemiresistive biosensors. The dominant mechanism of sensing switched from direct chemical doping to electrostatic gating when the target analyte changed from H+/OH- ions in pH testing to whole viruses. The experimental limit of detection for M13 for this platform was 0.5pM and an increased sensitivity as well as variability was observed in devices with smaller channel widths. Preliminary device calibration was completed in order to correlate a resistance response to a bulk M13 concentration. The polyethylene terephthalate (PET) based SWNTTF platform was developed to demonstrate the commercial potential of SWNTTF chemiresistive biosensors by detecting relevant concentrations of brain natriuretic peptide (BNP) on economically viable substrates. The pH response of these chemiresistors confirmed that chemical doping was the cause for resistance change in the SWNTTFs. The preliminary results demonstrated successful BNP detection at 50pg/mL using both aptamers and antibodies as recognition elements. Using SWNTTFs as the transducing element of chemiresistors allowed for further understanding of electrical mechanisms of sensing as well as achieving sensitive, real-time and reproducible electrical virus and biomolecule detection. Although these platforms do not achieve ultrasensitive limits of detection, they demonstrate the commercial potential of platforms using SWNTTFs as the transducing element of electrical biomolecule sensors.