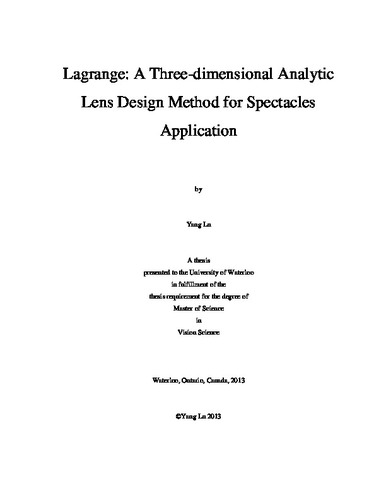 Purpose: traditional optical design is a numerical process based on ray tracing theory. The traditional method has the limitation of the application of the spectacle lens because of the necessity of initial configurations and the evaluations of the aberrations of the lens. This study is an initial attempt to investigate an analytic lens design method, Lagrange, which has a potential application in modern spectacle lens for eliminating the limitation of the traditional method. Methods: the Lagrange method can derive the differential equations of an optical system in term of its output and input. The generalized Snell’s law in three-dimensional space and the normal of a refracting surface in fundamental differential geometry are applied to complete the derivation. Based on the Lagrange method, the solution of a refracting surface to perfectly image a point at infinity is obtained. Results: a Plano-convex lens and a Bi-convex lens from this solution were designed. In spherical coordinates, the differential equations of the single surface system and its solution were obtained. The optical design software, ZEMAX, was used to simulate the lenses and evaluate their image qualities. The results illustrated that both of the two lenses were aberration free. Conclusions: the Lagrange solves unknown lens surface based on definable inputs and outputs according to customer requirements. The method has the potential applicants of the modern customized lens design. Moreover, the definable outputs make the simultaneous elimination of several aberrations possible.