Modeling of Permafrost Distribution in the Semi-arid Chilean Andes 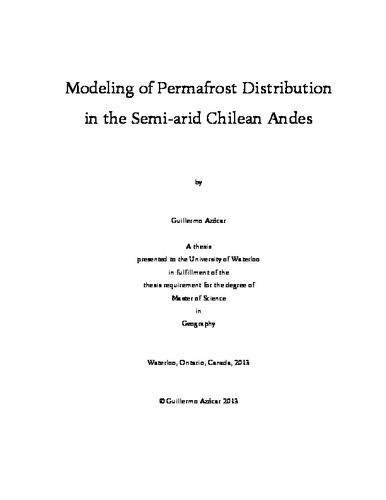 The distribution of mountain permafrost is generally modeled using a combination of statistical techniques and empirical variables. Such models, based on topographic, climatic and geomorphological predictors of permafrost, have been widely used to estimate the spatial distribution of mountain permafrost in North America and Europe. However at present, little knowledge about the distribution and characteristics of mountain permafrost is available for the Andes. In addition, the effects of climate change on slope stability and the hydrological system, and the pressure of mining activities have increased concerns about the knowledge of mountain permafrost in the Andes. In order to model permafrost distribution in the semi-arid Chilean Andes between ~29°S and 32°S, an inventory of rock glaciers is carried out to obtain a variable indicative of the presence and absence of permafrost conditions. Then a Linear Mixed-Effects Model (LMEM) is used to determine the spatial distribution of Mean Annual Air Temperature (MAATs), which is then used as one of the predictors of permafrost occurrence. Later, a Generalized Additive Model (GAM) with a logistic link function is used to predict permafrost occurrence in debris surfaces within the study area. Within the study area, 3575 rock glaciers were inventoried. Of these, 1075 were classified as active, 493 as inactive, 343 as intact and 1664 as relict forms, based on visual interpretation of satellite imagery. Many of the rock glaciers (~60-80%) are situated at positive MAAT, and the number of rock glaciers at negative MAAT greatly decreases from north to south. The results of spatial temperature distribution modeling indicated that the temperature changes by -0.71°C per each 100 m increase in altitude, and that there is a 4°C temperature difference between the northern and southern part of the study area. The altitudinal position of the 0°C MAAT isotherm is situated at ~4250 m a.s.l. in the northern (29°S) section and drops latitudinally to ~4000 m a.s.l. in the southern section (32°S) of the study area. For permafrost modeling purposes, 1911 rock glaciers (active, inactive and intact forms) were categorized into the class indicative of permafrost presence and 1664 (relict forms) as non-permafrost. The predictors MAAT and Potential Incoming Solar Radiation (PISR) and their nonlinear interaction were modeled by the GAM using LOESS smoothing function. A temperature offset term was applied to reduce the overestimation of permafrost occurrence in debris surface areas due to the use of rock glaciers as permafrost proxies. The dependency between the predictor variables shows that a high amount of PISR has a greater effect at positive MAAT levels than in negative ones. The GAM for permafrost distribution achieved an acceptable discrimination capability between permafrost classes (area under the ROC curve ~0.76). Considering a permafrost probability score (PPS) ≥ 0.5 and excluding steep bedrock and glacier surfaces, mountain permafrost can be potentially present in up to about 6.8% (2636 km2) of the study area, whereas with a PPS ≥ 0.75, the potential permafrost area decreases to 2.7% (1051 km2). Areas with the highest PPS are spatially concentrated in the north section of the study area where altitude rises considerably (the Huasco and Elqui watersheds), while permafrost is almost absent in the southern section where the topography is considerably lower (Limarí and Choapa watersheds). This research shows that the potential mountain permafrost distribution can be spatially modeled using topoclimatic information and rock glacier inventories. Furthermore, the results have provided the first local estimation of permafrost distribution in the semi-arid Chilean Andes. The results obtained can be used for local environmental planning and to aid future research in periglacial topics.