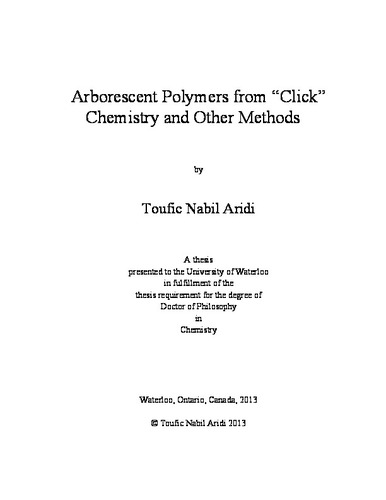 Graft polymers with a dendritic architecture (arborescent polymers) were synthesized by “click”, anionic, and cationic grafting. Arborescent polystyrene and polybutadiene systems were synthesized by “click” coupling using alkyne and azide functional groups, one of which was introduced randomly on the polymer substrate, while the other functionality was located at one end of the polymer serving as side chains. The two possible combinations of randomly and end-functionalized components were investigated for both polymer systems, but the best method for polystyrene involved side chains with an azide end group and randomly acetylenated substrates; for polybutadiene, acetylene-terminated side chains and randomly azidated substrates were preferred. The end-functionalized polymers were derived from a bifunctional initiator to introduce a protected hydroxyl group, which was converted into either an azide or an acetylene functionality. Coupling of the end-functionalized side chains with the substrate polymer serving as backbone yielded a comb-branched (or G0 arborescent) polymer. Further cycles of substrate functionalization and grafting led to the subsequent (G1 and G2) generations of arborescent polymers. Linear and branched (G0 and G1) hydroxylated polystyrene derivatives, some of which served as intermediates in the synthesis of the randomly functionalized “click” grafting substrates, were also explored as macroinitiators for the cationic polymerization of ethyl vinyl ether. The substrates functionalized with either secondary or tertiary alcohol groups yielded the desired arborescent polystyrene-graft-poly(ethyl vinyl ether) copolymers, without formation of linear contaminant. Arborescent polybutadiene of generations G1 and G2, with different side chain molecular weights, were also synthesized by anionic coupling of living polybutadienyllithium side chains with substrates functionalized with chlorosilane groups for comparison with the “click” methodology.