The Residue of Flight: Investigations Into the Life of Matter 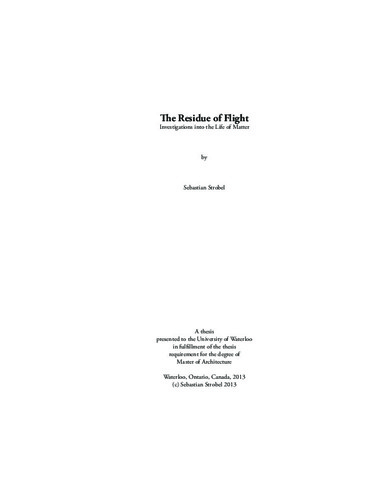 This thesis is a journey that unfolds alongside the transformations of a river during springtime. Moods and movements captured by Ted Hughes in his poem Stump Pool in April inspire a series of explorations that set out to express the affective vectors of the river’s becoming through sculpture and architecture. The thesis is a manifestation of this search. Arranged as a narrative in five chapters, each offers an account of the emergence of the five works. The first three are a sculptural response to each stanza of the poem: Prometheus manifests the river’s phase-shift from ice to water, Sky Burial from water to steam and Icarus the passage of steam rising towards the sun. Prometheus’ torment, the tearing dispersal of the body during a funerary ritual and the ecstatic flight of Icarus are caught through three material and fire based experiments. Chapter four reflects on these works while investigating the conception and construction of the Bruder Klaus Chapel by the renowned Swiss architect Peter Zumthor. The fifth chapter moves the exploration from sculpture to architectural design deploying the lessons learned from the previous works. Forces of descent rather than ascent now inform the creation of a torrential void, A Lover’s Enclosure. The trajectory in each work and through the series is guided by what feels right, by the unpredictability of the material imagination, working by hand, and by forming and re-forming reoccurring themes as they reverberate and transform in a continuum of affective transformations.