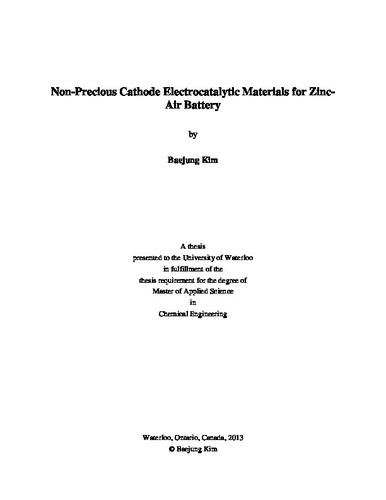 In the past decade, rechargeable batteries attracted the attention from the researchers in search for renewable and sustainable energy sources. Up to date, lithium-ion battery is the most commercialized and has been supplying power to electronic devices and hybrid and electric vehicles. Lithium-ion battery, however, does not satisfy the expectations of ever-increasing energy and power density, which of their limits owes to its intercalation chemistry and the safety.1-2 Therefore, metal-air battery drew much attention as an alternative for its high energy density and a simple cell configuration.1 There are several different types of metal-air batteries that convey different viable reaction mechanisms depending on the anode metals; such as Li, Al, Ca, Cd, and Zn. Redox reactions take place in a metal-air cell regardless of the anode metal; oxidation reaction at the anode and reduction reaction at the air electrode. Between the two reaction, the oxygen reduction reaction (ORR) at the air electrode is the relatively the limiting factor within the overall cell reactions. The sluggish ORR kinetics greatly affects the performance of the battery system in terms of power output, efficiency, and durability. Therefore, researchers have put tremendous efforts in developing highly efficient metal air batteries and fuel cells, especially for high capacity applications such as electric vehicles. Currently, the catalyst with platinum nanoparticles supported on carbon material (Pt-C) is considered to exhibit the best ORR activities. Despite of the admirable electrocatalytic performance, Pt-C suffers from its lack of practicality in commercialization due to their prohibitively high cost and scarcity as of being a precious metal. Thus, there is increasing demand for replacing Pt with more abundant metals due economic feasibility and sustainability of this noble metal.3-5 Two different attitudes are taken for solution. The first approach is by optimizing the platinum loading in the formulation, or the alternatively the platinum can be replaced with non-precious materials. The purpose of this work is to discover and synthesize alternative catalysts for metal-air battery applications through optimized method without addition of precious metals. Different non-precious metals are investigated as the replacement of the precious metal including transition metal alloys, transition metal or mixed metal oxides, and chalcogenides. These types of metals, alone, still exhibits unsatisfying, yet worse, kinetics in comparison to the precious metals. Nitrogen-doped carbon material is a recently well studied carbon based material that exhibits great potential towards the cathodic reaction.6 Nitrogen-doped carbon materials are found to exhibit higher catalytic activity compared to the mentioned types of metals for its improved conductivity. Benefits of the carbon based materials are in its abundance and minimal environmental footprints. However, the degradation of these materials has demonstrated loss of catalytic activity through destruction of active sites containing the transition metal centre, ultimately causing infeasible stability. To compensate for these drawbacks and other limits of the nitrogen-doped carbon based catalysts, nitrogen-doped carbon nanotubes (NCNT) are also investigated in the series of study. The first investigation focuses on a development of a simple method to thermally synthesize a non-precious metal based nitrogen-doped graphene (NG) electrocatalyst using exfoliated graphene (Ex-G) and urea with varying amounts of iron (Fe) precursor. The morphology and structural features of the synthesized electrocatalyst (Fe-NG) were characterized by SEM and TEM, revealing the existence of graphitic nanoshells that potentially contribute to the ORR activity by providing a higher degree of edge plane exposure. The surface elemental composition of the catalyst was analyzed through XPS, which showed high content of a total N species (~8 at.%) indicative of the effective N-doping, present mostly in the form of pyridinic nitrogen groups. The oxygen reduction reaction (ORR) performance of the catalyst was evaluated by rotating disk electrode voltammetry in alkaline electrolyte and in a zinc-air battery cell. Fe-NG demonstrated high onset and half-wave potentials of -0.023 V (vs. SCE) and -0.110 V (vs. SCE), respectively. This excellent ORR activity is translated into practical zinc-air battery performance capabilities approaching that of commercial platinum based catalyst. Another approach was made in the carbon materials to further improve the cost of the electrode. Popular carbon allotropes, CNT and graphene, are combined as a composite (GC) and heteroatoms, nitrogen and sulfur, are introduced in order to improve the charge distribution of the graphitic network. Dopants were doped through two step processes; nitrogen dopant was introduced into the graphitic framework followed by the sulfur dopant. The coexistence of the two heteroatoms as dopants demonstrated outstanding ORR performance to those of reported as metal free catalysts. Furthermore, effects of temperature were investigated through comparing ORR performances of the catalysts synthesized in two different temperatures (500 ℃ and 900 ℃) during the N-doping process (consistent temperature was used for S-doping). Through XPS analysis of the surface chemistry of catalysts produced with high temperature during the N-doping step showed absence of N-species after the subsequent S-doping process (GC-NHS). Thus, the synergetic effects of the two heteroatoms were not revealed during the half-cell testing. Meanwhile, the two heteroatoms were verified in the catalyst synthesized though using low temperature during the N-doping process followed by the S-doping step (GC-NLS). Consequently, ORR activity of the resulting material demonstrated promising onset and half-wave potentials of -0.117 V (vs. SCE) and -0.193 V (vs. SCE). In combination of these investigations, this document introduces thorough study of novel materials and their performance in its application as ORR catalyst in metal air batteries. Moreover, this report provides detailed fundamental insights of carbon allotropes, and their properties as potential elecrocatalysts and essential concepts in electrochemistry that lies behind zinc-air batteries. The outstanding performances of carbon based electrocatalyst are reviewed and used as the guides for further direction in the development of metal-air batteries as a promising sustainable energy resource in the future.